On Sunday, while I was away helping Janiece and her SmartMan with some yard work, my property was being shredded by hail. I had a nice pile of it on the deck when I got back home and the pear tree looked like this at the top: 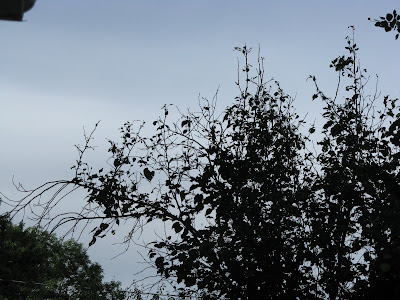 Worse, I had taken my beautiful herb plants out from under cover just that morning. The only one that escaped unscathed was the thyme, since I had forgotten to bring it back out from under cover. It occurred to me that it might hail, but I didn't think it would, since the reason the plants were under cover in the first place was that on Saturday it had hailed very slightly and I caught it in time to put them under cover. It certainly wouldn't do that two times in a row, right? No, it hailed worse. :(
The most damaged one was the Italian basil (this photo was actually taken after it had recovered for 24 hours while my camera batteries recharged): 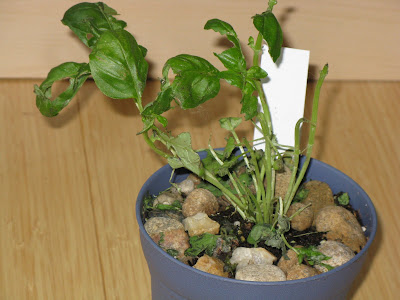 Susan, the dear, has offered to buy me a new basil, so I shall be basil-less for only a short while. Of the other damaged plants, I think the mint and the rosemary will probably recover. The Thai basil is 50-50.
Seeing my poor ravaged plants makes me feel like a bad mother who sent her kid to school without a coat.
I'm bad plant mother. :(
Posted by Anne C. at 7:59 PM

Sorry your plants sustained the damage. Did your house escape intact?

Awww, you're not a bad plant-mom! It's just Darwinism at it's best... you're cultivating strong, healthy, indestructible plants!!! ;) *HUG*

Basil is indestructible. Put that sucker in the ground and it'll sprout new leaves in no time flat.

Many of my plants are gnawed by my cats and come back quite healthy.

Remember, plants are meant to be grazed and have leaves damaged/removed.

I'm a little reluctant to put it in the ground, since I wouldn't be able to protect it from further hail damage, but I guess that's the risk one has to take sometimes.

Vince, I'm actually going to have someone come and look at my roof. I had evidence of a leak (water on the floor), but the roof immediately over the area seems in good shape.

Anne, our roof is damaged, so it's good that you're having someone come. And the leak "location" in the house usually has little to do with the actual location of the roof damage, unfortunately...

Our assessor will be out in a couple weeks - the insurance company is flying in assessor teams from Texas to help, since Colorado has been hit so hard with hail. :-(

My brother whose leaving CO today (on his bike) was absolutely amazed by that hail storm. We just don't get stuff like that on the East Coast, and he lives in LA. He just has to worry about fires and earthquakes...

As general information, the hail has been accompanying several smallish tornados that have been buzzing around Mummy Grabill's area. She posted a spectacular photo of one and her brother and SIL had to duck under an underpass to avoid another plus hail and a microburst. Things can be exciting around the Denver/Fort Collins area of Colorado.

More exciting than usual, I'd say.

And, you're right, Janiece. I figured out later that the leak location might be based on the original roofline (where it laps under an addition's roof).

Anne, you're not a bad plant mother.

Mother Nature is a BITCH!!!