We're all gaming here at Casa Ana.
Brian's playing Wolfenstein: Enemy Territory,
Aileen's playing Myst,
and I'm playing The Crystal Key.
Both of these latter are adventure/puzzle games.
Oh, yes, and Iron Chef is on the TV.
Posted by Anne C. at 9:50 PM No comments: 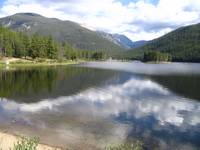 Where we went canoeing and fishing. 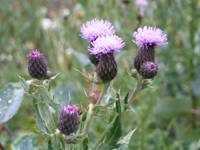 Taken during my solo hike...

Hmm... Another hiatus...
Well, I'll have to attribute it to the increased workload at the office.
Last weekend I went camping in the beautiful Rocky Mountains (near Granby) and will post a picture momentarily. Anyway, it was one of the (if not The) best trips ever. Granted, I got to the campgrounds late, and it was raining most of the way there.
The campground was 9 miles off the main road, but it took me half an hour after I turned off to find it on the dark, rainy, and (hard-packed) dirt road. But! When I found them, I was greeted by my friends who had a fire going and canopies up and a very nice guy helped me put my tent up during a temporary halt in the rain.
The next morning started out very misty and I took a solo hike along a ridge, taking lots of photos with my new digital camera. Then later that morning it cleared up and got sunny just as we were starting a group hike along the lake's edge. I almost lost my high school sweatshirt, but luckily (and with the help of someone's binoculars and someone else's sharp gaze) found it . After we got back and relaxed a bit at the campsite, I was convinced to go along on a canoeing/fishing trip. I'm so glad I did. The lake was beautiful, the canoeing so fun (I sat in the middle and took pictures instead of paddling), and one of our group caught a big brown trout. We saw an osprey that had a nest on a neighboring island and a moose on the way back to the camp.
That evening was nice. The stars were out and I had grilled buffalo steak and trout. Someone brought a really good bottle of tequila that I got to taste a bit of. No scrunched up tequila face with that one.
The next day, I just lounged around the campsite and knitted until it was time to pack up and go. Through a friend's suggestion, I drove back over Trail Ridge Road, "the highest continuous motorway in the United States" according to this webpage. Wow. Now that was an awesome experience. I saw elk crossing the road (stopped the traffic) and snow in the mountains. Then, since I was "nearby" I called up some friends and family in Ft. Collins and went up to visit. Like I said -- Awesome Trip.
Posted by Anne C. at 12:40 PM No comments: 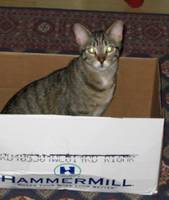 Whew! My cats are normal! (See Exhibit A) 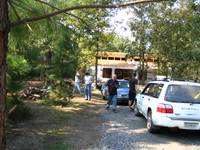 (Yes, Virginia, there are trees in Oklahoma.) From my recent visit to the new homestead. It's nice to see my architectural education paid off.

Re: The Long Hiatus

Work has been very busy 'round here, so I haven't had time to goof off, darn it.
The ironic thing is, we just got cable internet at my house... 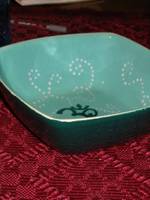 My latest paint-your-own-pottery project. I originally intended it to be a catfood bowl, but now I think it's too nice for that. The symbol in the bottom is the Hindu symbol for om. 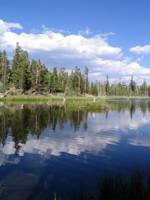 The destination for a hike I took on Saturday. A typically gorgeous shot, but I decided to post it anyway. I think my digital picture taking skills are improving.

Whew! Life is busy!
I have some great photos from this weekend that need to be posted, plus I need to redesign my website, including a version of this blog.
I may be soliciting the assistance of a web-savvy cousin of mine (I'm lookin' at you, Reuben) to help me refine and put into action the new design.
Posted by Anne C. at 10:02 PM No comments: