Busier than a One-armed Paper Hanger

or (one I heard just recently)...
Busier than a one-legged man in a butt kickin’ contest.

This latter is actually more accurate, since what's been keeping me busy is whipping a project into shape. We have a major permit set for a really big building (see the post called "Fan Club" (Mar. 16)) going out in eleven days. I've been working overtime, which I dislike doing and working on the weekend, which I dislike even more. It's not often that we have to do this though, so I guess I shouldn't complain.

It is taking precedence over my blog however, so I ask my two readers to sit tight for the moment. I'll come back soon, I swear!
Posted by Anne C. at 12:29 PM No comments:

A male friend of mine recently told me that my flaw is that "you're not very... subtle."
Fortunately I had the self-composure to laugh and agree.
Upon reflection, it also makes me want to cry, as real truths often do.
I'm just going to have to find someone who sees lack of subtlety as a strength, rather than a weakness.
Posted by Anne C. at 4:38 PM 2 comments:

Oooooh, say can you see
By the dawn's early light
Anne paying off her credit cards

That's right folks, Anne is officially out of debt.
Sure, I still have a mortgage, student loans, and a home equity line of credit, but The Evil Credit Cards are paid off.
WooHoo!

It's been at least 4 years since I started paying them off in earnest. (When I get home I'll look on my computer to figure out how long this journey has been and modify this post.)
Yesterday I got my federal tax refund and this morning I paid them off online.
I still have some money from the refund left, and I've been debating what to buy with it. I've come to the following conclusion:
- get new tires and a new battery for the car
- replace the remaining stolen CDs so I never have to say "I had that, but it was stolen" again
- put the rest in savings.

Yes, that will be my big reward for years of (mostly) good discipline - putting money in savings. Not only is it a good start on what I hope are good discipline years of saving, but it will begin the foundation of a real reward - never having to pay overdraft fees ever again. I'll actually have a cushion in my bank account, instead of a cold hard floor. One day I'll have a fluffy mound like The Princess and the Pea, but for now I'll settle for a darn good pillow.
I do intend to buy a few household items: a Dutch oven, a blanket, some curtain rods, and eventually some new bedroom furniture, but that will happen when it's convenient and appropriate, not as a big ticket reward. It will be part of the save *then* spend mode.

I really don't feel much different (after I purged images of a Paris Hiltonesque Anne parading around Denver), but I did have a dream last night that I moved to a new house. Not that I'm going to in real life; I love my little abode. It was symbolic. It's a new beginning. :)

Postscript: I just did the calcs on Amazon.com and found that buying the remaining items in my "Restore Annie's DVD collection" is no small matter. About the same as buying a modest piece of furniture. I did, I'll admit, add a few books (one I've been planning to give as a gift for ages, two Scalzi books I've been wanting too) and one cheap DVD (Shaun of the Dead) to bring us to a round number.
It's a big chunk of cash to spend on entertainment for a gal who's been on an Amazon diet for quite some time.

Postscript to the postscript: After some thought I remembered another book I've been wanting, so I took off Shaun of the Dead and added Candy Girl. I don't end up at a round number now, but whatever, it's just an affectation.
Posted by Anne C. at 9:08 AM 1 comment:

It's really comforting to hear when other writers are experiencing difficulty writing. Not that I'd wish that on anyone. It's a terrible thing. But one of the things you hear from that nay-sayer inside your head is: "REAL writers can manage it. You just don't have the chops." It is invaluable to have the example to point to that here is another writer whose dedication you admire who is having difficulty - not because she lacks desire but because that is part of the writing process.

This goes out in tribute and support to Nicole (aka: vortexae) who will triumph in the end.
Her description of the struggle my be found here under the post "Fear of... something."
Coincidentally we are both reading from the same book: Victoria Nelson's "On Writer's Block." I started reading it when I got sick and was forced by inactivity to examine my own life. I believe I went on about it sufficiently in this post. When I opened up the book to find a good random quote from the book, I opened it up to the chapter "Writing over the Block, Obessive Rewriting." Appropriate, considering Nicole's current stage. It begins with an evocative sentence:
"In the breathless pause between plan and execution, a little breach opens that quickly widens into a gulf when the writer stops to look down - and with each added moment of hesitation the gulf yawns wider and wider."

In another odd quirk of coincidence, I also opened to the quote:
"A first novel is like a first pancake; you have to throw it out." - Anonymous
This morning I just finished reading Agent to the Stars, one such "practice novel" (in the author's words), by John Scalzi that he posted on his website here for people to read for free. I actually have the hardcopy version which they published after he published his first "real" novel. I highly recommend it. It's a light and fun read. Not too deep, not too shallow. Gives hope, even for first pancakes.
Posted by Anne C. at 3:06 PM 1 comment:

Of this 94 minute film, the first 30 minutes or so seemed to take forever. It was random, hard to follow, and had few really funny jokes. Then suddenly (right around the hot chestnut joke) it became increasingly hilarious, until the last 30 minutes the audience was laughing almost continously.

HOWEVER, it is not necessary to know the book before you watch the movie. They very cleverly include people's commentary on the book and that's where you learn the above. And as soon as you understand that is the point of the book, the movie clicks into place.

There are many many layers to the movie, too many to explain. My favorite is where the moviemakers discuss the possibility of adding a scene between the infant Tristam and his father to make the father more human and shortly after, they have a beautiful scene where the egotistical main character changes his baby's diaper and sings him to sleep. Even though I knew what they intended me to feel, I still fell for it. Supposedly there were lots of inside jokes for fans of the actors and the director, but it was fine. I had more time to admire the other layers of the movie.

Be warned: It is very English and nonsensical. It's not so postmodern as to be completely inaccessible, but it certainly does not follow the standard narrative arc. It's a well-crafted comedy, but not for the faint of heart.

In other news: We saw trailers for three movies beforehand and two of them looked good. Keep an eye out for Brick and Marilyn Hotchkiss' Ballroom Dancing and Charm School.
Posted by Anne C. at 10:28 PM No comments: 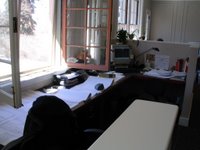 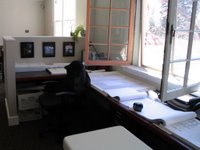 As some of you know, my office moved to a new building. Here are photos of my new desk. It's pretty darn sweet. I don't have the deck outside my door, but there is a bigger and better courtyard out back. The desk itself is really long, so kind of difficult to utilize. I've designated one side as my work space, and the other side as my conferencing area. The main advantage are the big windows. The view out the big one is mainly of a small roof and a big tree (crab apple, I think, which may bloom any day). The view through the smaller one near my computer is of trees and sky and if I manuver just right, of the courtyard below. There isn't much traffic noise, except when helicopters go over (we're near several news stations). I have different roommates now, Mark and Rachel instead of Dee.
So far, I like it. 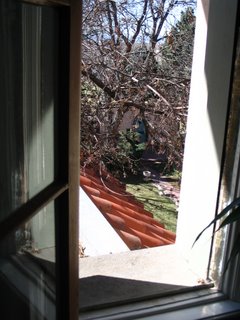