This post is to introduce a couple new links I have put on my sidebar:

All About Grayson is a blog by my childhood friend, Laura. She and I have known each other since kindergarten and now she's living in her parents' old house and has adopted a beautiful boy. This blog is all about that little boy.

Photos by Kero aka Kevin is a photographic blog by a fellow who frequents Scalzi's Whatever. His photos are beautiful depictions of the city in which I live.
Posted by Anne C. at 6:00 PM No comments:

I read the first article, interested in how popular culture is currently portraying the dating scene. It was a series of brief interviews with women who had dated "fantasy" men. It was almost universally cautionary or negative, with only one woman actually marrying the guy in question. Most of the time it was: it was great at first but then I had to compete with the guys at the firehouse or the models he was photographing. Or the guy being too wrapped up in his job - like the comedian or the Hollywood screenwriter.
Curious, I wondered what guys would say about thier fantasy women. I did not really find what I expected. For the most part, they were positive and at least three were still with the women they described.

What does that mean? I find it hard to believe that men are *so* bad and women are *so* good. Of course, there's the possibility that such a small sample of interviews yielded atypical results.
I'm inclined to believe that men and women have different things in mind when they think of a fantasy date. In a way, men are more realistic by having what some might call lower standards. Dating a hot stewardess (excuse me, flight attendant) means getting good sex and high fives from thier friends. That's all they're really looking for. If he gets more, like the model that turned out to be a good friend and mate, he is happy and a little surprised at his good fortune.
Women, on the other hand, tend to set their expectations sky high. Romantic movies make every man into a possible Prince Charming. That rock star boyfriend gets her envious looks from her friends, but when he has groupies hanging on his every look, a lack of commitment becomes untenable.
Maybe it's less about the actual relationship and more about how men and women recall experiences. Men focusing on the positive aspects and the women focusing on the negative.
The final possibility is that one or both of the writers (Maggie Kim & Dan Bova) had different preconcieved ideas about what they expected to hear.

This analysis of course, contains generalizations. There are plenty of men who look for more in a woman, but they don't call those women a fantasy date. Dating is only that -- dating. And there are women who just want to date a restauranteur so they can be escorted about the city by someone with connections. There are always exceptions, but culture seems to perpetuate stereotypes.

Am I wrong? Why are those articles so different? If men and women are equal but different (Nature or nurture? That's another question.) as I believe, what does the results of this informal study mean?
Posted by Anne C. at 10:26 AM 4 comments:

And the Concrete Pours On 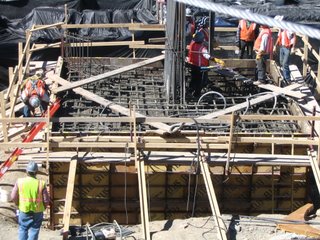 I didn't catch any pictures of the big pour of the core pier cap last Friday, but here's a slightly smaller one that's also near the center of the building. The draped black stuff in the background are insulating blankets on the earlier pour. They regulate the curing of the concrete and keep the outside portions of the concrete from cooling a lot faster than the interior of the concrete. The more evenly it cools, the better and more consistent the concrete will be. (The opposite would be bad, like having a cake that cooks too fast, so that the edges are done while the center is still raw.)
Posted by Anne C. at 4:09 PM 2 comments: 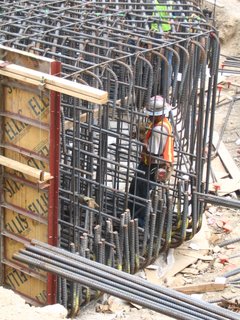 I have not been inspired to cook much lately (been feeling a bit run down) but fortunately, I have construction photos to share.

This one I took today. If it looks like a cage of steel, you're partly right. The worker shown is tying together the rebar for a massive pier cap that is the foundation for the stair and elevator core for my building. Some of those 1 1/2 diameter pieces of steel can be seen on the bottom of the arrangement. Steel is included in concrete construction because while concrete has a lot of compressive strength, it has very little strength in tension. The steel keeps everything from pulling apart.

When we were out on the site, Mark (the architect) said something like "looks like a lot of steel out there" and Christina (the assistant project manager) said "I see a lot of money out there."

The concrete will be poured for this foundation in a week. I hope to get photos!
Posted by Anne C. at 4:34 PM 3 comments:

Progress at the Site 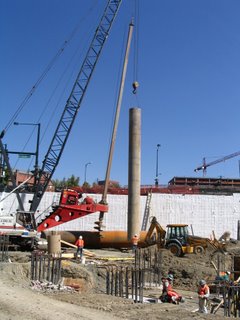 It's getting pretty impossible to take a panorama from the same spot I was, because of all of the heavy equipment in the way. So, I'm going to resort to taking interesting shots during my field trips to entertain you folks and let you see how the building is progressing.

This picture is of the giant metal sheathing for the caissons (typically 6' dia. by 80' long, though the one shown is not) being raised into position. It follows the caisson drill down to hold the earth back. Then, the steel reinforcing cage is lowered into the caisson hole. (The steel bars get up to nearly 1 1/2" in diameter!) An inspector goes into the hole to make sure the reinforcing and all is properly made and properly placed. Then, they pump concrete into the hole while withdrawing the steel sheath. It's quite a production.
Posted by Anne C. at 3:05 PM 2 comments:

Back from the Pacific Northwest 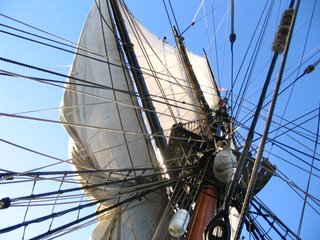 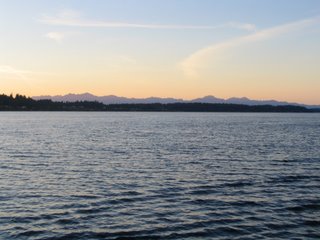 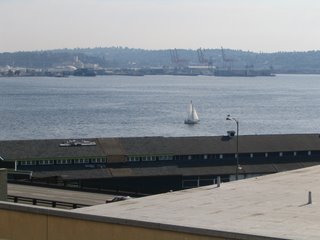 In a few more words: I went to Olympia, Washington, for my sister, Karen's, wedding. She got married on a sailing ship, The Lady Washington. It was so much fun. I enjoyed it even though I hurt my knee again while horsing around on a bike.
The next day we went to the shore, to a place called Westport. I enjoyed that too.
The third day we went to Seattle. I think I would have enjoyed Pike Place Market more if we hadn't gone on a holiday weekend. Plus, we were getting a bit tired and cranky. The day ended on a positive note, however, when we had a family BBQ with our new in-laws who are funny, lively, and caring - in a nutshell, damn similar to us. The other times we were travelling. And I've decided to get a rolling suitcase after my saintly brother-in-law toted my old (my dad's from when he travelled for work) suitcase around the airport.

I'm glad to be back though. I've got two happy cats that have been sitting on me all day.
Posted by Anne C. at 12:41 AM 5 comments: