"We'll catch you on the flip-flop."

Today I got some news that I was kind of hoping for and dreading at the same time.  My dear Uncle Sam passed away this week.  The good news is, he went the way he wanted to go -- independently, in his own home, with little fuss and bother.  The bad news is, the selfish beings he left here in the physical must continue on without his humor and love to make the going easier. 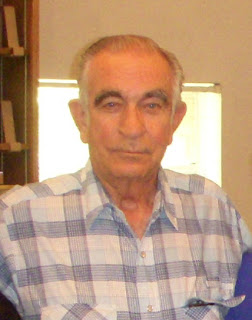 I am so glad I moved out here to Denver and got to know my father's siblings and their spouses and my cousins.  Uncle Sam and Uncle Arch helped me to fix up the house. When I bought it, it needed new floors throughout and a new fence and the two of them helped me do it.  Two septuagenarians (both 72 at the time) labored over my new hardwood floor and cedar fence.  I'd feel guilty, except that pair of jokesters had so much fun doing it.  I know Sam didn't always have the best relationships with those he loved, but with me, he was always loving and supportive - even when I first showed up at one of our lunches at Olive Garden on my motorcycle.  He joked that I'd be causing accidents, since all the fellas would be rubbernecking to see the gal on a bike.  He was my AAA when I had a car that didn't automatically turn the lights off when the engine was turned off.  I would be coming home late from school and the battery would be dead, because I had left the lights on after driving in the snow, and he come out from Lakewood in the middle of the night to jump start my battery.  He had the best memory (until those last few years, anyways) and was a great storyteller.  The decline of his memory and independence was difficult to witness.  I am SO glad things worked out so that we could have that mini-reunion for his 80th birthday.  It was wonderful that everyone made an effort to get together and share the day.   I always think of Sam when I see a big rig and I think my dear sister put it best when she posted some lines from a C. W. McCall song:


And then everyone was asleep, except me. And as I saw the morning star come up over the mountains, I realized that life is just a collection of memories. And memories are like starlight: they go on forever.

We will miss you, Uncle Sam, you gave us some great memories.  Give Aunt Waneta a hug and a kiss from us.  Love, Annie
Posted by Anne C. at 1:14 AM 3 comments:

This link has been put about on Facebook, but I know some of my readers have not, so I will repost it here.

Roger Ebert is best known as a movie critic, but ever since cancer and the attempted treatment of it changed his life, he has emerged as a preeminent modern essayist (in the form of his blog).

This post about loneliness struck a chord for some of my friends, and it does for me as well.  One thing he did not bring up, but a commenter later on does: some of the loneliest times I have ever experienced were in the presence of another person.  I would state "most of the..." but I have a crappy memory and I'll give myself and others the benefit of the doubt.  For me, loneliness is about connection and sharing - or lack thereof.  Most of it can be avoided by exerting oneself, and the remainder must be endured.

Fall in the Mountains

Photos from my trip: West Virgina

Some time ago, I posted a link from the Daily Show that made a case for the US political machine being like the WWF.  It brilliantly illustrated a long held speculation I've had about politics.  (Re-watching it, I still think it's brilliant.)
In mid September, I had a similar feeling of concurrence.  This feels a little like deja vu.  As a non-conformist, this happen rarely (it had better!) and as a moderate, this happens rarely (unfortunately) as the media doesn't  cover moderation very often.  Jon Stewart, on the Daily Show, announced the Rally to Restore Sanity.  He said it would be for all those people who are tired of the divisiveness of the current political climate, to which I thought, “Absolutely.  It would be cool to attend that. How often do you see a rally for moderates?”  Of course, I'm not going to pay hundreds of dollars just to go stand with a crowd of people, no matter how much I agree with them.  Besides, I had two fears: one, that the rally would be co-opted by extreme liberals (I know Jon doesn't swing that way, but many people who watch his show do), and two, that it would be all shtick and no substance.
A week or two later, I was planning my trip to WV and MD, and I realized that I would actually be in the area the weekend of the event.  The stars aligned and I ended up going with my hostess, Jen, and her friend, Sarah.  (My one regret is that Sarah and I didn't explain the purpose of event to Jen a bit more, so she knew what it was about beforehand.) We made a small detour to check out the Smithsonian Museum of the American Indian (very cool building – I'd like to visit again and spend half a day there...) and then dove into the crowds of the rally. 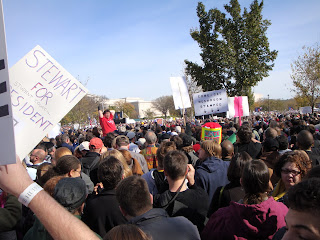 Current estimates place the crowd at 200-215 thousand people.  I'll not go into a long description as this article from the BBC summarizes the situation well.  There were some great signs; my favorites were “Poster Board is a Terrible Medium for Complex Arguments,” “!,” and “What do we want? Moderation!!! When do we want it? In a reasonable time frame.”  (Some more can be found in this gallery.)  It was an extremely diverse group of people with all ages, colors, and creeds represented (here's a photo gallery from the event).  I saw lots of women in Muslim headscarves (which, unlike some former NPR journalists, makes me feel happy about diversity).  For people-watching, it was a “target rich environment.”  The noise of the crowd, however, drowned out any hope we had of actually hearing the event, and after a couple hours, we left, needing a toilet not in a plastic box, a place to sit down, and somewhere where we weren't being jostled every other minute.  Turns out, being somewhere where the crowd was continually moving was good for people watching and bad for people averse to being knocked about by people who (sensibly, I admit) carried all their provisions for the day on their backs. 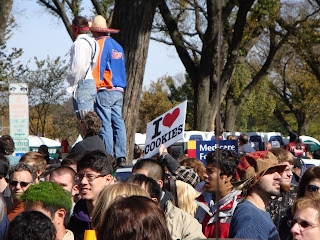 Later, we caught up though commentaries and live-blogging on some of the events we'd been present for but couldn't see or hear.  The pundits claiming that this would be something to motivate the youth to vote missed the point entirely, as should be evident from some of the un-youthful entertainers they had: Yusuf Islam (formerly Cat Stevens), Ozzy Osbourne, The O'Jays, Kareem Abdul-Jabbar, and R2D2.  After a day or two, Comedy Central has posted most of the show online. Most notably, we listened to Jon Stewart's closing speech, which can be seen here as “Jon's Moment of Sincerity.”  I highly recommend watching it, as the sentiments expressed are extremely sensible and illustrated well (I love a good metaphor!):


My fears were laid to rest, as it was neither partisan, nor without substance.  I wish I could have heard it live (the recording is deceptive – the crowd was never silent, there was always some idiot (not Jon) talking) but I am satisfied with having been there, having represented, and knowing that the cameras were recording Jon telling the world what I and many like me want to say:
“We are reasonable people and we can work together and be diverse at the same time.”
Thank you to Jon Stewart and all his minions for doing this for us, the quiet moderates.

Postscript: Yesterday, I saw video from a post rally press conference.  Both Jon Stewart and Stephen Colbert acquit themselves well.  Stephen had shed his larger-than-life parody character and was actually himself.  He has a gentle demeanor that was very surprising to me.  Jon, as I've seen in other interviews, was earnest and easily shed questions that tried to apply too much political meaning to the event.  Great interviews, if you're interested.
Posted by Anne C. at 2:26 PM 2 comments: