I haven't been posting the soccer results lately, but my team is doing tons better lately.
We won the last game of the previous season (Aug. 15), which I missed. :(
Then we won the first game of the new season (Aug. 29), which I did not miss. It was pretty much a blowout, since the team we were playing were really new.
THEN we won last night's game against an opponent that has beaten us three times before. It was a hard fought game, we were down 1-6 at the half-time. We won 10-8. They are a very physical team, so we got into a few scuffles, but it was a very enjoyable game. :)
Go Team!
Posted by Anne C. at 1:37 PM No comments:

Here's Lookin' at You 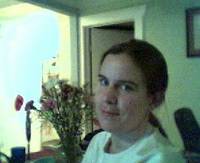 Yours truly in front of my new (FREE!) webcam. Apparently Comcast is trying to get people to use their video email service. I don't usually like photos or video of myself, but this webcam is strangely addictive.

Coordination conference in my office between Director of Construction, Project Architect, and Project Designer. Design-Build in action.

Two articles that came to my attention today...

Flag Redesign
Posted by Anne C. at 2:09 PM No comments:

I have had some trouble updating my blog for the last few days. I don't know if was Blogger or me (probably the former), but I deleted some of my posts containing incidental photos (test posts and the like), in case you were looking for them.
Posted by Anne C. at 1:19 PM No comments:

A sunset Aileen and I saw on the way back from scouting a temp job location.