I went out and about with Janiece (and her Smart Man) and Michelle (and HER Smart Man) this afternoon. We had a blast hanging out at the Museum of Nature and Science. Yes, you heard me right. Hey, until you've hung out with a bunch of geeks at a nature and science museum, don't knock it.
We then had dinner at Racine's (a Denver standard) before having to leave Michelle and Michael at the train station. :(
I forgot my camera, so have no photos of food or friends or anything else, so will have to mooch of Michelle or Janiece.

Oh, and we got something fun for someone(s) and hopefully you'll hear them blog about it when it comes in the mail. MUAHAHAHAHHAHAHAHAHAHHA!

(In the meantime, I'm tired and have cats to feed, so I'll post more tomorrow.)

The Next Day:
Janiece has posted some great pictures and a description of the event.
Nathan also blogged about his version of events. Yes, we called a few other UCFers. Yes, we had consumed a drink or two (depending on lightweighted-ness). Yes, we were having a good time. I hardly think that qualifies as "stinkin' drunk." Maybe a little tipsy. ;)
I'm sure Michelle and Michael will post when they get back to WV and recover from their trip. :) They are, as Janiece says, perfectly charming and funny people. I would *definitely* be friends with them regardless of where we met.

And since I didn't have a photograph last night, but do tonight: 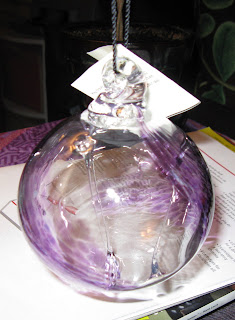 Here is the gorgeous LOOT that Michelle and Michael gave me during their visit. It's a beautiful glass ball called a "witch ball" and according to the tag "Witch Balls were very popular during the 18th century England, but their origin is thought to be much older. For over 300 years hollow glass balls have hung in windows to ward off a Witch's spell, Evil Spirits, and Ill Fortune." I haven't figured out where to hang it so people can appreciate it's beauty, but I have a couple ideas. You can see in the photo that it's mostly clear glass with a swirl of purple around it. It's so lovely. Thank you, Michelle and Michael!

Much much later:
And now we have a report from Michelle. Go read and look at the fun pictures! :)
Posted by Anne C. at 8:40 PM

Heh. I'm in NY next week, so if something comes my way, a Durian or two might be heading West.

And since everyone but Tom and Ilya live West of me, that's a lot of territory. ;-)

Yeah, the tipsy voice mail made my day.

Glad you guys had fun and I wish I could have been there.

I sent you the original shell image--unresized.

Sorry when it clogs up your mailbox.