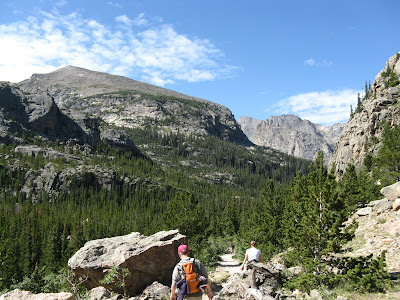 I spent half the long weekend with my friends, Stacey and JR, and their daughter, Kat, and her boyfriend, Chad. We stayed in a cabin at the YMCA resort complex in Estes Park. Seriously. They had mini-golf (which we did on Saturday afternoon and I sucked, as usual), playing fields of all sorts, a library, an indoor swimming pool, all kinds of things, really. Saturday morning, JR and Stacey and I hiked up to Mills Lake (you can see the two of them in the picture above), while Kat and Chad, being lowlanders, took a shorter hike to Bear Lake. It was gorgeous, but that's pretty standard for the Rockies.
Speaking of which, the following photos are for Michelle, who thinks the Rockies are a coniferous monoculture: 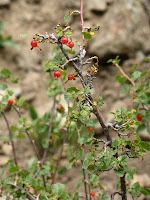 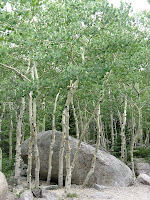 Pbbbbblllltttttt! ;P
After hiking, we went on a short horseback ride. I had a young, but sensible, horse named Hidalgo. Why sensible? He actually listened to me (unlike 90% of these trail horses). We had a good time and I wish it had been longer. I love horseback riding. 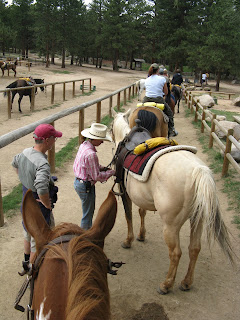 We had a good time. I always enjoy Stacey and JR's company and Kat and Chad were very entertaining. Quite literally, in fact. On the trip back, I got Chad reciting Monty Python routines. That was fine, since it kept him entertained and required no response -- kind of like listening to the radio.

I actually did some labor over the weekend. I helped my brother and his fiancee pack their moving truck on Friday (after being on the bike for two hours through a traffic jam on the way to their apartment) and then yesterday I did chores around the house.
So, a well-balanced weekend for me. Hope it went equally for you!

That view is stunning! I so wished I lived someplace that wasn't flat.

What fun! I'm so glad you were there to help Max and Jenn. Horseback riding sounds like lots of fun, I haven't been in such a long time.

The one time I went horseback riding, the horse basically ignored anything I had to say about where we should go. It kept running me into trailside foliage, and broke into a trot every time we reached a clearing (we were supposed to be walking the whole time). Then I was sore out of my mind for the next week.

I love the picture of the mountains! That is absolutely gorgeous!

And what is the plant that looks like a demented geranium?

These picrures are why I love to visit Colorado!!

Sounds like a great weekend. It also sounds like the kind of weekend you need a separate vacation for once you get home. Great pictures!

Those are totally gorgeous pictures! What a great way to spend the weekend.