I am clearing off my shelves (trying to reduce clutter) and decided to finally cull my unread-books shelves. These, appropriately enough, are the shelves that contain books that I either purchased or obtained (in some fashion or another) that I have not yet read. I am slowly coming to the realization that I may never read these books.
When I was a kid, I read pretty voraciously, mostly because it was an escape from a world that I didn't think suited me very much. I still love to read, but now I also love to see friends, watch good movies, watch good TV shows, read my friends' blogs, write in my blog, write fiction, go outside, cook meals, bake brownies and cookies, and do household projects, not to mention the time needed to do things that I previously didn't have to do clean the house, go to the gym, cook meals (yes, that's in there twice), and have a social life if I ever want to have a mate. Plus, I don't need to escape as often.
So, now I have books I've had for years (I figured out how to beat the book buying addiction: don't go into bookstores, especially during a sale) that frankly, don't interest me anymore. I'd like to give them to a good home, and know of a good second-hand store, but wanted to give you guys a first crack at them. There is another option. Recently Shawn posted about a book exchange club called Paperback Swap. It looks interesting and I am sorely tempted, but I don't know that I'd use it all that much. Like I said, I don't read that quickly anymore and I do have a big backlog of books.
In the meantime, I thought I'd have a book giveaway. It's the opposite of those posts on Scalzi's Whatever, where he posts (brags) about all the free books he's gotten lately and posts a picture. It kills me that there are books sitting here unread and unappreciated and I know I just won't read them, no matter how long they sit on that shelf. So, thank goodness I didn't inherit the collecting gene (that my mum has), 'cause here goes...

Science Fiction (not many of these, as I am currently on a SciFi bent) 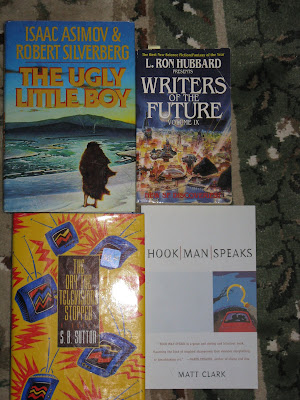 The Ugly Little Boy, by Isaac Asimov and Robert Silverberg: a time travel book about a little Neanderthal boy brought into the present. Given to me 15 years ago by a pen pal and I... dammit, can't give a gift away until I've read it. ***If you want this, let me know and I'll read it ASAP and send it to you.
Writers of the Future, Vol. IX, presented by L. Ron Hubbard: collection of short science fiction, with a few essays by L. Ron Hubbard, Octavia Butler, and Kevin J. Shwartz Anderson. (I originally had Songsmith up here, until I realized it's not in the photo, so you'll have to wait til I read it and have another giveaway to get that one.)
The Day the Televisions Stopped, by S. B. Sutton: Title is self explanatory.
Hook Man Speaks, by Matt Clark: This is more comedy/suspense, I think, and tells the story of the guy in all those campfire tales. It looks really good, I just haven't gotten around to it and admit now I won't. 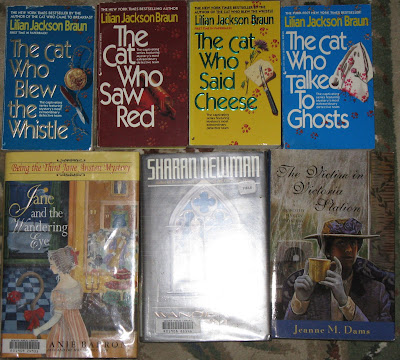 The Cat Who Blew the Whistle, The Cat Who Saw Red, The Cat Who Said Cheese, and The Cat Who Talked To Ghosts, all by Lillian Jackson Braun: This is a really cute series (these are only part of The Cat Who Series, so linear readers, beware) about a journalist who solves mysteries with the aid of his two very well drawn Siamese cats.
Jane and the Wandering Eye, by Stephanie Barron: I like Jane Austen, so I thought I'd like this (picked it up at a library sale, so it's a hardback). Unfortunately, never got around to reading it. It's a mystery and the main character is Jane Austen and it's the third of the series (again, linear readers, beware).
The Wandering Arm (heh two wanderings in a row), by Sharan Newman: This is a mystery set in 12th century France. Again, looked interesting, former library hardback, third in a series (sorry!).
The Victim in Victoria Station, by Jeanne M. Dams: British mystery of some sort, hardback, 5th in a series (dammit)

OK, I've got to go, but I've got more to post - Fantasy and Historical/Nonfiction. So, I'll post part 2 of this series tonight or tomorrow morning. :)

Ah, perhaps I should say more explicitly -- let me know if you'd like any of these books and I will mail them to you, free of charge.
Posted by Anne C. at 5:29 PM

I would love some free books and am open to anything! I'll be waiting for the fantasy since I'm a fantasy type of girl =].

Regarding Paperbackswap -- I find it amazingly fulfilling to send someone a book they request. You know that awesome feeling you get from giving someone something they really want? Yeah, it's like that.

Of course, if I could make people smile as a career, I'd so sign up. Maybe I'm just strange. :)

So I take it you don't want me to leave you my book collection in my will?
Also, a good technique for not having books you won't read more than once is to first borrow them at the public library when they are hardbacks, and then, if you REALLY like them, buy them as a paperback (because they take up less room) and remember which ones you REALLY like by placing them on a (secret) wish list on your Amazon account until they BECOME paperbacks and then slide them on over into your public wish list...

I agree with Shawn, but I also like surprises. I'll be thrilled to receive anything you want to send. Just stick to fiction and I'll be ecstatic over getting free books.

BTW, I'm pretty sure you're on the short list of UCFish folks who've never gotten anything from me.

I'll cheat and make you win the next contest.

Alright, yan, I'll get right on that second post. I'm pretty sure you'll find something interesting in the offerings. :)

Shawn, you make us smile on a daily basis, so you obviously have a talent for it. ;)

Brenda, I most certainly DO want your library when you kick the bucket! But that'll be eons from now (it better darn be!) and I'll have a bigger house with a room that is The Library and all the books will go there. Right now I have a tiny house and limited shelf space. And while I'm giving some away, I'm definitely keeping bunches.

Nathan, thanks for the offer of throwing a contest for me. Janiece's apple butter and the DVD have me feeling pretty flush at the moment, so I'll say I'm pretty sure all these things even themselves out in time. Remember, with the UCF, the name of the game is expect the unexpected. Guilt based on irregularity (not that kind!) is not allowed! :D
Oh, yeah, and I'd be happy to pick out a book for you.

I'd love to enter for any of the mystery books.
Thanks!
RebekahC
littleminx@cox.net

Ooh! Free books! You're speaking my language! I'm very interested in the Asimov actually. I've never even heard of that one before.

I'm impressed that you're cleaning off your To Be Read shelf. I haven't brought myself to be that ruthless yet. I'm pretty good about paring down my collection of stuff I actually *have* read and keep only things I'll either reread or things I'd lend out. (Of course I'm also unconsciously developing a third category: things I'm saving for Kirk when he gets older. That one's more of a crapshoot...)

Anne - we might have to duke it out for some of Brenda's books btw. Or at least I can come to "The Library" and order up a nice tea to have while I snuggle down to your comfy reading chairs (I'm sure you'd have some). :-)

Yes, I will have comfy chairs (and all the books). ;) You're welcome to come by and visit them any time you like.