Plants, Links, and a Movie 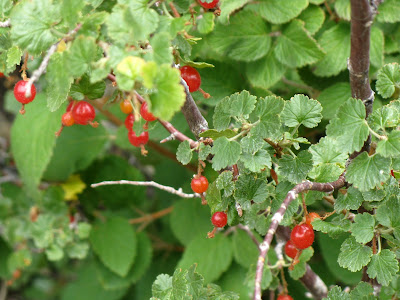 And what is the plant that looks like a demented geranium?
- Michelle

I don't know, Michelle, but here's another photo. There are definitely red berries on it, so it's not an actual geranium, but you're right, there is a resemblance.

I've been busy of late, so I thought I'd post some excellent writing I've run across recently.

Something logical: Secondhand Information and Its Dangers

Something humorous: A Story of Three Brothers (need I say more?)

And if you're looking for a good movie, I'd recommend Traitor, with Don Cheedle and Guy Pearce. It's a well written and tightly plotted political thriller. The friend I saw it with claimed it was predictable, since he guessed the ending, but I guess I was caught up enough in the story and the acting not to guess it, except as a passing thought. It's also a good start for a conversation about religion and world politics. It's good and I'll give it 3 stars out of 5.
Posted by Anne C. at 9:43 AM

Hiya there! I'm going to ask my parents about this plant and let you know if they have a clue... they're great green investigators!

Also, I wasn't sure if I replied to your comment within my own blog if you'd get a notice, so I'm here to tell you to feel free to shower the link-love away! I am careful about what I post, and since I'm trying to get a children's book published you're not likely to find much in the way of cussing on my blog... HAHAHA I like having repeat viewers, the idea of building up a community. :) And right now, I intend to click on the links you've provided in this post!

Thanks for the movie recommendations -- I'll have to check "Traitor" out! I recently watched "Miss Pettigrew Lives for a Day" on DVD -- it was entertaining and cute! Definitely worth a look-see, if only to marvel at the awesome set design and wardrobe!

I think that alpine plants are not ones I'm going to figure out easily. :)

Mom and I think it might be a member of the RIBES family... http://en.wikipedia.org/wiki/Ribes. Basically, a currant or a gooseberry. Deciduous or evergreen. Those w/out spines are called currants, and with spines are gooseberries. Some native species are ornamental. They grow 3 - 6' tall. Berries in summer from yellow, to red, to black.

I don't think it's a currant.

The leaves are more fan shape than lobed, and the berries look like they're hanging singularly instead of in bunches.

*Maybe* a gooseberry. The grouping of the berries looks more correct, but the leaves on Anne's plant still aren't as deeply lobed as the pictures I'm finding.

Also the gooseberries look striated, and these berries, although ripe, don't look like they have any striations.

Onewandering - very nicely done, great sense of mood and release. And I, too, liked that last ironic line. :)