This is the second half (first half here) of my book giveaway. 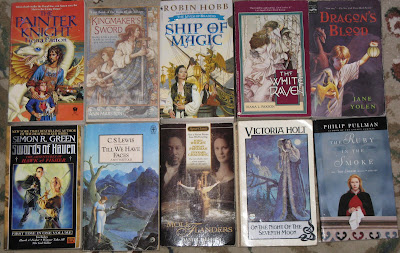 The Painter Knight, by Fiona Patton: Apparently (I didn't realize this until I just looked up the link on Amazon), this is the middle book in a trilogy. However, the blurb on the back did not make it sound like it was. It's a straight out fantasy with magic and gods and dragons (as it seems from the cover - Jody Lee is usually pretty accurate). The hero is a painter who must save the heir to the throne from (of course) evil plotters. (Great cover art.)
Kingmaker's Sword, by Ann Marston: First (ha HA!) book of the Rune Blade Trilogy. From all the flowing red hair and tartan on the cover, I'm going to hazard a guess that this is a Celtic fantasy. (Again, great cover art.)
Ship of Magic, by Robin Hobb: It's books like these that make me wish I had unlimited reading time. It looks very good - Fantasy on the High Seas - but I just don't have the time. :( The Amazon review says "reminiscent of Moby Dick and Patrick O'Brian's Aubrey/Maturin series in its details of shipboard life." It's Book 1 of The Liveship Traders.
The White Raven, by Diana L. Paxson: This is a story based on the legend of Tristan and Isolde, and is (obviously) another Celtic/Arthurian Fantasy. From the reviews, the central story is one parallel to the Tristan/Isolde story.
Dragon's Blood, by Jane Yolen: Book 1 of the Pit Dragon Chronicles. The Amazon description says, "Training a dragon to be a fighting champion is the only way to freedom for fifteen-year-old Jakkin." That pretty much says it all.
Swords of Haven, by Simon R. Green: The adventures of Hawk & Fisher, a fantasy cop duo. It's actually a compilation of a trilogy about the pair, so all three parts are here. I actually read the first one, but it didn't suit my taste, so I didn't finish the book/trilogy. From the Amazon reviews, others liked it though.
Til We Have Faces, by C. S. Lewis: This is a retelling of the myth of Cupid and Psyche and is one of Lewis's classics. I just flipped through it and it looks very good too, darn it.
Moll Flanders, by Daniel Defoe: This is a book about a strong female character, scratching her way up from poverty to success in 17th century England. It was made into a movie in 1996 starring Robin Wright (now Penn). The frontpiece of the book, written by Defoe is quite telling. "The Fortunes and Misfortunes of the Famous Moll Flanders, Etc. Who was Born in Newgate, and during a Life of continu'd Variety for Three-score Years, besides her Childhood, was Twelve Year a Whore, five times a Wife (whereof once to her own Brother), Twelve Year a Thief, Eight Year a Transported Felon in Virginia, at last grew Rich, liv'd Honest, and died a Penitent." Hmm, sounds a lot like the Angelique series I would sneak from my mum's bookshelf. I don't know how racy Moll Flanders (pub. 1722) is though, and so cannot comment on its suitability for Michelle's grandmother. Technically, I suppose, this qualifies as a Romance or Historical, rather than fantasy.
On the Night of the Seventh Moon, by Victoria Holt: This is also a hisorical/gothic romance, and from the reviews on Amazon, one of the author's best. As usual, it looks interesting, I just don't have the time or inclination anymore.
The Ruby in the Smoke, by Philip Pullman: Book 1 of the Sally Lockhart trilogy. I bought this because I liked The Golden Compass, but I was never able to really get into it. Another case of a good-looking book with no time to read it.

Speaking of having no time, this post has been taking too long to write. I need to get some household chores done! I will try and finish this process with the Misc. books in Part 3 tonight or tomorrow.

Again, if any of these sound interesting to you, let me know and I'll send them to you, free of charge. If I can't read them, I want them to go to a good home. :)
Posted by Anne C. at 9:13 AM

I have had it on my wish list for awhile.

I said it before, but I'll take anything you think I'd enjoy. I like fantasy (and I've secretly read a romance or two...don't tell anyone).

Ship of Magic...fabulous..the whole series was great.
Anne, What was that book we read as kids about the unicorn, no electricity, nothing mechanical would work? I'd love to reread it.

Aw crap, I was gonna request "Ship of Magic". Well, you snooze you loose. Dragon's Blood and Swords of Haven both sound interesting to me, too.

I read Moll Flanders a few years ago and really enjoyed it. I wouldn't say that it was racy but it was *real*. I didn't enjoy it quite as much as Robinson Crusoe but it was definitely a great read and deserves to be better known than it actually is.

Ship of Magic is VERY different from her Assassin Apprentice series, which I loved. I though the Liveship Traders series was good, but I didn't like it, if that makes any sense.

As far as the Ann Marston. The first book was good but got a little weird in the end. The last book (mumble) which I still haven't read (/mumble) was very hard to find.

I have the Painter Knight as well as it's predecessor, and I don't think the third book has yet been published.

I own the White Raven. Haven't read it yet.

I liked Swords of Haven, for those interested. But it was definitely light reading.

If Michelle didn't abscond with it, I'd love "Til We Have Faces" please. If she did, I'd love Moll Flanders.