I'm still doing pretty well in unemployment land. I applied for unemployment on Thursday, which just means I started the process, not that there's money coming to me anytime in the next month or so.
I've found myself to be curiously busy. Part of it is still job related, for example, Tues. I went in to tie up some loose ends, yesterday I took a fellow laid-off-ee on a tour of my building so she could get some photos for her portfolio, today I'm going into the office again to get some photos I wanted but forgot, and twice I have gone out to lunch with the people from the construction office. Part of it is fixing up the house (the project in the basement will be blogged about in the near future) and trading services with a friend who is also laid off and fixing up his house. Then there are the phone calls and emails from concerned friends, plus evening gatherings I would be going to anyway (BSG at brother's house, women's group, etc.). So, I haven't been sitting around the house needing to motivate myself as much as I thought I would!

One of the fun things I did this week was go to a women's group (the spellchecker doesn't like the word "women's." What, a group of females can't possess something?) that supports each other in spiritual expression, development, and exploration. It's not focused around one dogma (in fact, we often express the differences in our beliefs) and that's what makes it an interesting group, in my opinion.
Last week, we met and two of the gals, who are artists, set up an evening of art, inspired by a woman who does "soul painting". They didn't set the bar too high - we didn't try to paint our souls, just tried a self/spiritual expression exercise with multi-media art. I found it interesting that two of the gals initially had trouble without stronger guidelines of What To Draw, but as they experimented with media and started talking instead of thinking so much, they did much better. Those of us with artistic (of the painting and drawing type) backgrounds linked in with that creative impulse a lot quicker.
Though I spent much of my childhood doing art (went to art camp every summer of high school), I don't do a ton of it now. Occasionally I will do a painting in gouache, but ultimately, I don't often find the time to play with art. I really enjoyed myself that evening, and though I really don't need to have yet another creative pursuit or buy the supplies for it, I'd love to do it more often.
We "warmed up" (loosened up, is more accurate) with charcoal, and one of my first efforts, I really liked what came to my fingers: 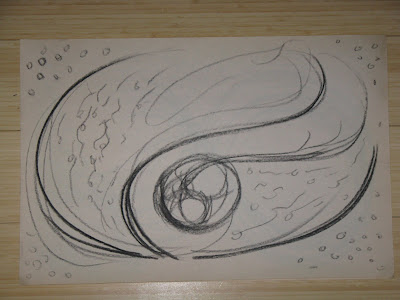 When we moved to the colored media (watercolors, chalk pencils, acrylic paint, oil pastels, etc.) I decided to base my next piece on that first one. I had a really fun time doing multiple media (which I haven't done much of). It really yields some interesting depth and texture. I was very pleased by the outcome. If pressured, I would say it represents where I feel I am right now, but ultimately, it's a nice piece of art: 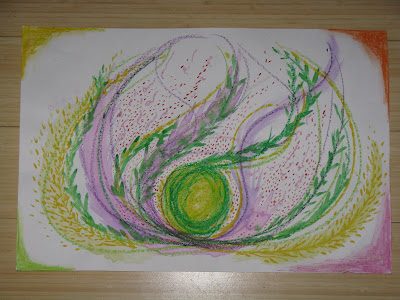 Let me know if you want gouche supplies for your birthday...

I spelled that wrong, but since my initial impulse was to say "squash supplies," I think I'm making progress.

Hee! Thank you, Janiece. Actually, what I was thinking was getting some inexpensive multimedia stuff, like a small set of oil pastels, a small set of acrylic paints, cheap watercolors, etc. I'd have to see what I already have, first.
However, you can hold your horses on birthday presents. That's two months away and plenty of time for me to fall in love with some other creative pursuit. ;)

The b&w has almost a mandala feel to it - but the color version moves away from it.

Oh, that women's group sounds like a lot of fun... especially if it gives you the opportunity (and time) to pursue creative endeavors like art!!!

Your drawing -> artwork gives me the visual sensation of being underwater. I now have a need to curl up on the couch with a cup of hot cocoa (HOW on earth did you know I *heart* dark chocolate?!) and watch The Little Mermaid or Splash! :)

Yay! You got the package! I figured that if we think alike in other respects, then you would probably love dark chocolate as much as I do. :D

Jeri, yeah, I noticed that difference. I had wanted it to transfer over more than it ended up doing. :/