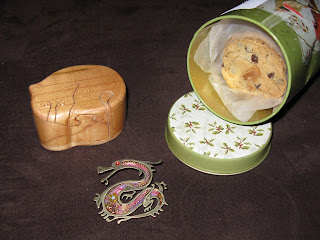 I had a lovely Christmas and I hope you all did too. :)
I got cozy socks, Stardust (LOVED it!), and Harry Potter and the Order of the Phoenix. I also got some lovely stocking presents, including a lovely dragon pin and a sweet little puzzle box shaped like a cat (both shown above).
THEN, yesterday morning (though it might have been there since the 31st) I found on the doorstep a yummy tin of homemade cookies (also shown above) from Jen A! She is just too much some times. Thank you, Jen! I have my revenge planned!

Now, it's the new year, and after several lovely gatherings of one sort or another, I'm ready to begin what's looking like it will be an exciting (in that Chinese curse kinda way) year. Several of my friends, like Michelle, talk about not making resolutions because "If something is important, why not just do it once you have decided it is important?"
Honestly, she's right. Every new second is an opportunity for a resolution to begin or begin again. However, there's nothing wrong with people needing an event, an impetus, and a special moment to begin doing things differently. Many heroic changes are started with a New Year's Resolution (for example, the incredibly brave Kate, who put it all out there on her blog and said "wish me luck"). So, I'll state something too. Something similar to Kate's. I am going to be aware of what I eat. I am going to exercise regularly. Not because I want to be thinner, but because I want to express how I love myself. I love feeling healthy and I love the way my muscles feel and operate when I am in shape. I want the beauty of my insides to be reflected on the outside. So, I'm not making a resolution, just another step in a path I've been on for... (Jeez!) nearly 15 years.

Happy New Year to everyone! And in honor of the new year, I'll point out to you Eric's musings about the arbitrariness of "keeping" time.

And finally, I'll mention that "staycations" are cheaper, but not really as good as "vacations". I've been on one of the former for the past week or so and while I read a lot and had a good time with my family and went to several fun get-togethers, I have been a lazy bum. Which is not generally OK when you are surrounded by a house that needs a little TLC. Yes, my dad and I worked on an ongoing project in the basement, but that one thing was offset by the hundred other things I can think of that need to be done. So, what you save in $$$, you make up for in guilt. :P
Posted by Anne C. at 12:00 PM

Yay! You got them! I hope you found them unbroken and yummy!!! :)

And I find it funny that something I've been doing for years now has a name.

"I'm taking two weeks off over Christmas."
"Where are you going?"
"NOWHERE! I'm going to lie on the sofa, read books, and eat chocolate!"

Unfortunately, those two weeks are quickly drawing to a close. Bah!

Hope you got your fill of books and chocolate.a

I clicked in yesterday when you had obviously pulled a "Nathan"...accidentally hitting publish even before you'd finished writing the headline. I had no idea what was going on. D'oh!

Much better now that there are words!
I want those cookies.

Michelle - The media sure does love a catchy phrase to describe something! (Anyone remember Bennifer? No? Good.)