My dearest cousin, Susan, and I like to get together and do a little gourmet cooking together every once in a while. (And every time we do, we say, "we must do this more often!") She is a delight to hang out with and we always have fun cooking together. (I did, in fact, have fun cooking with my new sister, Jenn, on Friday too. Apparently I've been cooking for other people a lot. Not coincidentally, Jenn will be included on Susan and my next gourmet night.)

Then, an adorable wrench was thrown into our works: 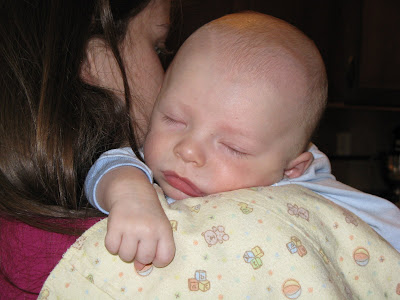 My siblings wanted to go to a friend's BBQ and needed a babysitter (Alex's first babysitter!). Susan and I decided to combine the events and try to have some cooking fun and babysit at the same time.

[We will now pause while the parents in the audience laugh their butts off...

Susan and I did try to take into account the split attention issue and planned some very simple recipes to try. Our menu looked a little like this:
Escargot in Garlic & Shallot Butter
Pan-seared Duck Breast
Lemony Fresh Linguine with Morels and Peas
Fava Bean and Fennel Salad (from A Platter of Figs, by David Tanis, coincidentally enough, the Fava Bean Salad is the recipe shown in the "Look Inside" feature)
Baked Pears with Butterscotch Sauce

All of these (with the exception of the fava beans, which turn out to be a lot of hulling) are super easy recipes. Yes, the pasta had an added element of making the pasta (which does take a bit of work, but not a lot). But, our dear little Alex decided to continue his routine of being fussy between the hours of 6:30 and 9:00. There were periods of quiet in between, but they usually coincided with times that one or the other of us was attending to him. So. I won't do a play by play, but we only got to have the escargot, fava bean salad, and pasta dish, and that last one was at about 10:30 when Alex's parents had gotten back. Fortunately, we don't mind eating on a Continental schedule.
Despite the challenges, Susan and I had a great time. The food was delicious. I brought my camera, but we kept forgetting to take photos. Here are a couple: 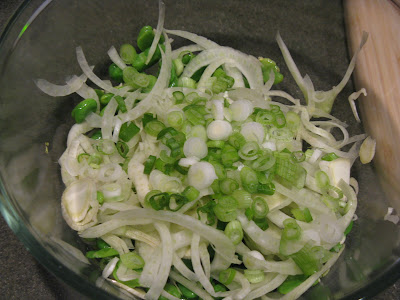 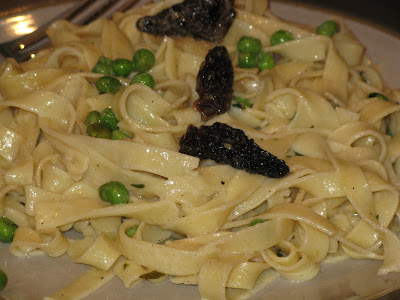 Yummy yummy pasta (leftovers were eaten by my sister and BIL... he called from the second floor to remind her to bring up his portion) 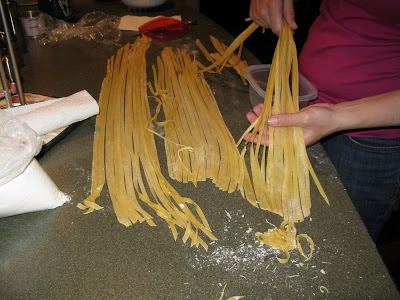 Here's a hint: If I come over to make pasta, there will be leftovers and I will package it up to put into your freezer.

Fortunately, Susan was planning to stay the night. So, for breakfast, we had tea and toast (so Susan could have some of Janiece's famous apple-butter), then Baked Pears, homemade scrapple (made by Susan's dad, Mike, and brought for my dining pleasure), and pan-seared duck breast. Eclectic? Yes. Delicious? Absolutely. 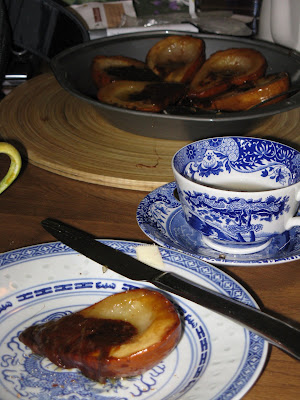 And because we ate every dish as a separate course, I can say, "thank you, Susan for a gastronomic series." I look forward to the next time.
Posted by Anne C. at 8:37 PM

The food looks and sound wonderful, and Alex is a cutie. Sounds like a gret way to spend the weekend.

Alex enjoyed having his Auntie Anne and Cousin Susan at his beck and call. ;-) More importantly, Mummy and Daddy Grabill enjoyed their first night out on their own!! So THANK YOU for your flexibility . . . and your left overs.

AND . . . for the frozen homemade pasta in my freezer. You are the BEST!

Why, yes, I did use the pause to laugh and laugh.

You're a good auntie.

I just love babies that nuzzle :)

Yeah, he is adorable, isn't he?

I call the over the shoulder carry the "potato sack." He has another favorite (from me anyway), which is being held in front, facing out. I think I'll start calling it the "helicopter" since that's what it would seem like in his position. It's a good workout for the arms.

Food looks fab, and sounds like fun was had by all.

We are sending the kid off for her first at-a-friend's sleepover on Saturday. It will be really weird to be in the house without her there.

I made the fava bean salad again Sunday evening for Dave. I got a picture of the completed product that I will send along to you!