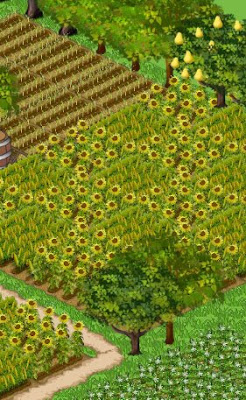 Farmtown, the game I've been playing on Facebook with my family and friends, has a wonderful blend of social and creative aspects. The game itself is pretty simple. You have a small plot of land, which you cultivate through plowing and seeding. Each crop costs a certain amount for seed and takes a certain amount of time to mature. Once the crop is ready, then you can harvest it and make your money back plus some profit. If the crop sits in the field too long, it goes to waste. There are also animals and trees, which bear salable fruit, both generally given as gifts, but the nucleus of the game is the growing and harvesting of crops. They can be laid out in any means you wish (with certain graphic parameters, of course) and you may plant what you wish, when you wish. This is the creative aspect of the game, and I'll get back to it in a minute.
The other main force of the game is community. If you have people help you harvest, you (the farm owner) can make more money. And when you help others harvest, you (the hired hand) make money too. These can be neighbors (ie. FB friends playing the game) or strangers, playing from around the globe. There is a "market" that is a chat room. Players who would like to work as harvesters go to hang out there, waiting for players who need to hire harvesters to come along. It can get a bit juvenile in there, but you can meet some neat people (I've met and worked with a Kiwi and a Canadian there). Plus, Farmtown has the option to "buddy" someone, which doesn't require friending them in FB. Hallelujah! Another way to make money and garner experience points is to visit your friends farms and do tidying up tasks (that don't really affect the farm).
The chat room fuction is also available to people who are standing in the same farm. (The farm is the "room" so only people there can see the conversation.) So, when Karen invites me over to harvest, we can catch up on things, and when Aileen shows up, she can join the conversation! This, combined with the lovely farms that both these women have - farms that you are looking at as you type - makes the experience feel like you are there, together, in the same place.
Aileen has a particularly nice farm (though Karen and I are close on her heels!) and it took me a while to understand why I liked so much. It had a more naturalistic feel that my own did at the time. Trees were planted in a clump behind the house and fields were not perfectly efficiently laid out. Gaps in the fields had trees or a hay bale to add visual interest. It was in those first days, when I was attracted to Aileen's naturalism that I also noticed that some places were rigidly gridded and some were a hodgepodge. Some included patterning in the crops (checkerboard, for example), which Karen incorporates very well on her farm. I saw giant farms packed with crops and barns and animals and paths. One of the most beautiful I saw was packed with giant fields, but they were all patterned. So, I'd say that in addition to the lovely chat room and community aspect, my favorite part is seeing how different people express themselves through their farms. 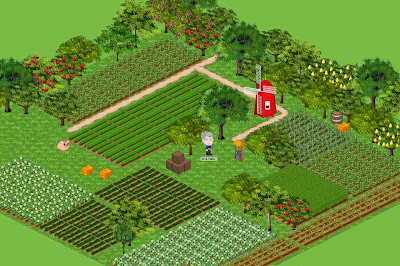 Me, I decided to take that naturalistic style that I liked so much and run with it. The picture above is of my farm (double click on it for a bigger version). I mixed all the trees together, so that they resemble a forest more than an orchard. I created a gathering space in the middle, for chatting. I still have rectangular fields, but they're not all oriented the same way. And there are trees springing up all over.
I don't have many animals. In real life, I love animals, but the ones in the game are a little annoying. They clutter the landscape or require fencing. They make (if you have the sound turned on) lots of noise. So, I have one pig (see if you can find him in the picture above). He was given to me by my niece, and he is very cute, wiggling his nose at you and snorting every once in a while. The best, however, is when he flops over to sleep:

*Note the strawberry patch, which was all white flowers in the overall photo, but had matured to berries by the photo of the pig.
Everything is nicely paced (you could time things to visit once a week if that's the way you roll). There are fun details, like the windmill and fences, etc. If there are people bent on world domination through industrial farming, it's easy to avoid them or miss them entirely. Some people take the game very literally, rotating crops so as not to exhaust the soil, or putting up hedges in the horse pastures for jumping. I like that eye for detail, since every element builds up a story around it. For example, Aileen's windmill is for power, so that her farm can be off the grid. It's these kinds of things that make the place feel homey. But the realism has it's limits, since - sadly - in real life we cannot just pick up a tree and move it across the farm, not without seriously endangering the tree.
We're trying hard not to be addicts. When I find myself wandering around there without much purpose in mind and no fields to tend, I try and steer myself off. I like fiddling with the trees, making them artfully but organically arranged. It appeals to my artistic nature. After gaining a strip of land to two sides of the farm, I had to move a bunch of things around. It was out of balance! I'll take a "photo" when I'm feeling more settled about the new arrangement. And the beauty of Farmtown is that while my artistic side is fed, my organizational side gets fed too. I made a spreadsheet to track the profits of different crops. 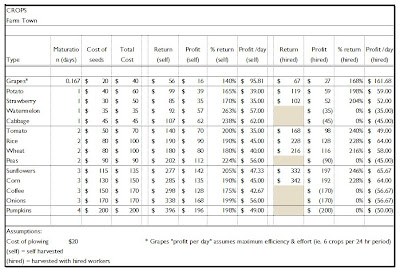 My Farmtown name is Annie Oakley and I am a Farmtown Addict.

ETA: Here's an image from his morning. I had lots of mature crops and trees, which makes it quite a colorful image. (click to enlarge) 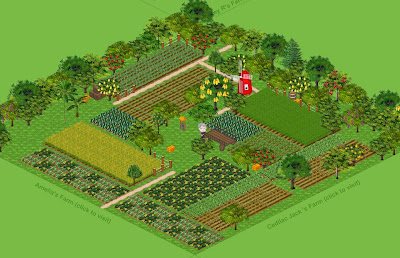 My Farmtown name is Aileen (I know, bo-ring!) and I am a Farmtown Addict.

It has been an exceptional amount of fun to "hang out" together at each other's farms and just chat about life. For those of you who don't know, our sister Karen lives in WA and therefore we don't get to hang out much IRL. It's been a tremendous amount of fun. My current challenge is keep my farm feeling natural and cozy while expanding the acreage at the same time . . .

Heh, now I feel all utilitarianlike. But I'm not high enough level to buy anything interesting yet.

What makes Restaurant City less enjoyable than Farm Town? You still get to decorate a space, and an exterior, though I guess it's harder to choose exactly what food you want to serve because that's based on what ingredients you have.

Also, MMORPGs and a number of multiplayer computer games have the same qualities of social chatting to them.

My Farmtown name is Chez Ronczy, and I am becoming addicted, sigh, alright, already addicted to Farmtown.

Ditto what Anne and Aileen said.

It's nice to earn virtual money while I sadly make no real money at the moment. Plus, I get to hang out and chat with my peeps...the virtual as well as RL

MWT, I'm not really sure.
Restaurant City is nice in that you get to decorate it (I like my Garden Cafe very much). But there are a couple things there that bore me a little. The limitations on ingredients (which may be less limited if you're one of those 500 friends people) and the need to keep the game on if you want to be accumulating points. I like that FT seems to have a lot more inexpensive flexibility. I can make changes that don't necessarily affect the efficiency of the farm, but entertain me. RC becomes enormously less efficient even with small changes in configuration.
Also in FT, there's the community aspect. Mainly with my IRL friends and family (as you've experienced, they're a friendly bunch), but even with others. Yes MMORPGs have this same thing. I like that FT has both the creative aspect and the community aspect together.
(When I played D&D back in the day, I liked being the DM (and making my own campaigns). That, again, combined creativity (and w/ D&D, storytelling) with community.

Does that make sense?

Hmm... cool. ;) And good points. I'm starting to drift away from the restaurant myself - at this point there's only one diehard left in the group I play with, but we'll convince her to shift over too soon enough... bwahaha... ;)

I was thinking to set up my farm to look like the abandoned ruined churchground that one of my vampires lives in, but so far stuff that'd look right for it isn't available, and the stuff that's available is too high-level. I might end up doing something else entirely.

"Plus, Farmtown has the option to "buddy" someone, which doesn't require friending them in FB."
Quick question: what is "FB". Is this a typo for "FT"?
Also, where, in the last of your FT pictures, is your pig? I found you at the center, with a wagon (I think). But no pig. By the way, nice hairdo.

Also, knowing pigs, I think it wouldn't just flop by a bed of strawberries. It would gobble them up, leaving a plowed field. Pig noses are excellent plows....

FB = Facebook
Farmtown is a game played through Facebook. Often, in FB games, they require you to "friend" someone merely to enlarge your resources in the game. Farmtown does not. Which is good.

And the pig must have been hanging out in the forest. I often have to wait for him to be visible when I take a "photo."
I'm very lucky that they have not included a function (yet) where unpenned animals damage the crops.

You can also click on the pig and then "move" on the little dropdown, and put him wherever you want. ;)

True, but sometimes when he's hiding, you can't select him in order to move. I suppose you could turn off the trees to really hunt him down, but for now, I'm OK with the situation. :)