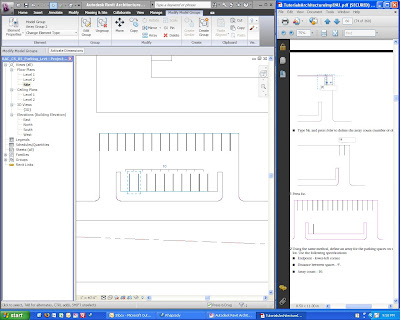 I've been cracking the whip over myself to keep at my latest project, learning my way around Revit ("building information modeling" but you can think of it as hyper-informative 3D drafting). It's terribly entertaining, as you can see from the screen-capture above. The program itself is on the left and an instructional manual including tutorials (downloaded from the website) is on the right. I'm working with the 30-day free trial download. After that, I can still "use" the program, but without saving or printing, or I can buy it. (Ha, yeah right - I have $5,495.00 floating around here somewhere...) The tutorials aren't too bad, once you get into it. But I want to finish them with enough time left in my 30 days (already wasted 10) to play around with it some. Unfortunately, like languages, learning for computer programs is never really there until you have to use it for a project. But in theory, I'll be ready when I get my next job.

I was listening to the Star Wars and LotR soundtracks, but they were both too interesting. So, I switched over to some Hans Zimmer. It's still movie soundtracks, but much blander. (Robin Hood: Prince of Thieves (not Zimmer) used to be my go-to bland soundtrack on cassette.) The others are fine for repetitive work, where I don't have to think much, but for the tutorials I was reading the instructions aloud to myself to make sure I followed all the tabs and selections and other directional stuff.

I've been trying to be good, but there's another project I've been fiddling with... yup, my farm: 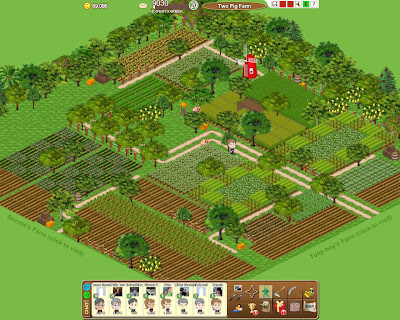 I've got more land and no house yet. I looked at the numbers for how long it would take for the new land to produce enough to pay for itself and found it was 6 days, way shorter than the approximately 12 days it'll take to save for the white farmhouse. That latter time frame will actually be shorter, since I only looked at crops (with average profits) and not tree harvests or my own harvesting work. Both are unpredictable, however, so I was doing a "worst case" scenario.
You may notice I've upgraded to two pigs. The farm seemed large for only one pig, so I kept a second gifted pig. We'll see how that goes before I add a third.

Edited to Add: Oooh, one of the patterns I planted three days ago just matured to 100%. Very cool! Take a look below: 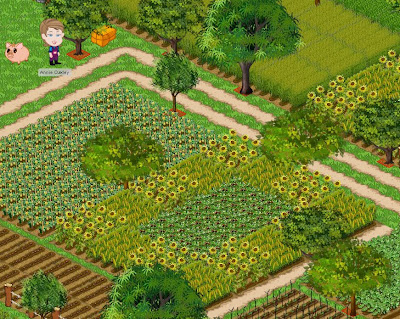 So far, my farm looks like some giant just randomly threw a plow and some seeds at the place from over the hill.

Too bad I can only get hired as a harvester. I might be able to make a living as a Farmtown designer if I could be hired to plow.

Don't be too hard on yourself, Nathan. Everyone's looks like that in the beginning. The important thing is to have fun.

Agreed, Nathan . . . it takes a while (and some cash) before your farm can really start taking shape.

Anne, the patterns in your fields are quite lovely! It's like a beautiful patchwork quilt!

Umm, maybe you won't need to "buy" more pigs. If you have two, they tend to propagate on their own....

Thank you, MG! I have some nice big fields to try out patterns on.

Brenda, unfortunately the game is not that realistic. Animals seem to have no drawbacks, like eating crops, but also no benefits - chickens do not lay eggs, cows don't give milk, pigs can't be turned into bacon, etc.