This past week, in amongst the studying, I have been playing a fun Facebook (FB) game called Farmtown. My sisters first drew it to my attention and I finally succumbed. I sat down to tell you all about it, and got sidetracked into a related subject that I've thought lots about (as you will soon see). So now, the Farmtown portion of the story will have to wait until tomorrow while I get this piece out of my system.

I have played several different types of games on FB. Some are more combat based than others. Mafia Wars is probably the best of the "combat" games, though many, following the latest craze for anything vampire related, play Vampire Wars. Those games require that you collect a gang of some sort - the bigger, the better - to fight other gangs. I like the advancement portion, where you do tasks and accumulate experience points and levels. This type of game has some attraction for a while, but gets extremely tedious as one of two things happens: a) the game forces you to acquire more members for your gang or b) the predominance of other players with gigantic gangs means you get beat up more often. Acquiring more members is not fun because it means you either have to plead with your FB friends to join to help you (even if they don't particularly like the game or gaming) or that you start adding FB friends who you don't even know just to get their membership (and they get your membership in return). I don't really like this. It clutters my FB experience with people I don't know from Adam, and don't care to. I *have* done it a few times, but as my interest in these games wanes, so has my willingness to pollute the FB "friend" status.
There are pure "combat" games, like Motorcycle Madness (boring, I'd rather be on a real motorcycle and not racing), and social spinoffs to the Wars games, like Sorority Life (which I did not join, just on principle). There is every flavor of "combat" game imaginable: pirates, knights/dragons, science fiction, you name it, they've got it. All structured on the same base rules though. 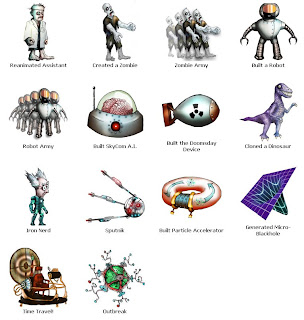 Then, I discovered Mad Scientist, for which I had the grand fortune of joining an established group including my friend, MWT. There, you have a team of eight scientists who help you with experiments and constructing various mad scientific devices. You start out with a Frankenstein ("fronkensteen!")'s monster and progress to cloned dinosaurs (several of these is called a Jurassic Park), zombies (and a zombie army), robots (robot army), Skycom A.I, virus outbreak, time traveling device, etc. You get the idea. My favorite is the LHC-style particle accelerator that, when run, will occasionally produce black holes. Hilarious! This style game is more about making things and achieving the next great thing (the latest thing is an orbital ion cannon. One of my skill levels is not high enough to complete it, so I'm running around making stuff that moves those skill levels forward. It's a great game and I do enjoy it. However. (You knew there would be a however, didn't you?) However, the pacing of the game is off. Once you get up to high levels, it takes your team only minutes to do something simple. And it takes bunches of little tasks to work up to the big tasks. So, if your web-surfing and can come back every few minutes, this is OK. But if you're not spending much time on the computer or are trying to actually get work done that shouldn't be interrupted every few minutes, it doesn't. It's easy to let the game take over the pacing of your life.

Each of these types of games emphasizes different personality types. There are the acquisition or goal oriented types, there are the dominance types, there are the process oriented types, and there are the creative types. Few people are just one of these types, most have a blend of two or more. Sometimes a person lacks enough of a personality trait that even having a multi-faceted game can't make up for the predominant facet. Pacifist types, for example, won't find much entertainment in Mafia Wars (and truth be told, the "fight" aspect of it is kinda boring and frustrating in my opinion). I think I tend towards the creative side of things. For a time, Mad Scientist filled that role and I got to advance without crushing others in my path. As I looked at the different types of games, I found it fascinating how each of the types emphasized (or exercised) one or another type of personality. [Stacey, thanks for being my initial ear on this musing!]

There are other games. I didn't even get into Restaurant City (which is getting closer to the Farmtown model. Nice game, good graphics, but has limitations, some related to how many "friends" you have playing the game. There are also games that I've been invited to play, but have never joined: Robin Hood, Heroes vs. Villains, Fish Wrangler, Epidemic, etc. Too many ways to waste time.

Egads. I'm glad I'm not the only one that philosophizes about these silly Facebook games. ;)

Farmtown looks like it's going to get just as boring and repetitive as everything else eventually. Though I'm enjoying it quite a lot at the moment. ;)

And all the Wars games are made by the same people (Zynga). I kind of wish they weren't just clones on Mafia - Dragon Wars, for example, could go in a completely different direction than the rest. Of course, then I found Hammerfall, which was basically what I wanted Dragon Wars to be - and it was great until I ran out of people I could coerce into signing up to Facebook to join my guild. >.>

So yeah. The main underlying limitation of nearly every Facebook game is the need to find more "friends." Though some are more playable without them than others - Farmtown being one of them. Mafia being another actually - you can play basically the entire game without having a big mob, you just get beat up a lot. On the other hand, if you don't care what your death counter says, that may not matter, as it doesn't actually hinder you from doing the jobs and collecting items.

Oh also, I met your sister Karen on your farm this evening. We had a lovely chat. :)

I agree wholeheartedly on Mafia Wars. The fight aspect is kinda of silly to me because I'm not fighting, I'm clicking a button. And if I don't win there are no real consequences - yes I lose health, but I can easily restore it by going to the hospital (which I can do almost any time I want), I can lose money but I'm smart and don't carry it when I'm actively heading in to fight (of course, I do lose some when I'm not around, but money is so easy to come by in that game, who cares?). So really I don't care if I've gotten beat up or died a million times - no skin off my back!