My birthday began well. I was at a (non-birthday related) party on Saturday night and we had stayed so late that five minutes after midnight, my friends (the 10 or so people still lingering at the end of the party) burst into song and serenaded me with "Happy Birthday to you." We had a great time talking and laughing with them and in the wee hours of Sunday, finally left, headed for bed.
Since we had been up VERY late, we slept in and thankfully, I didn't get the first of several birthday calls until a reasonable hour of the morning. All the birthday wishes, either called in or online were greatly appreciated.
I made a yummy breakfast of bacon and scrambled eggs (with mushrooms and cheese) and then we finished up watching the end of season 1 of Rome. At that point (sometime in the afternoon), we decided it was time to switch bases and zipped on down to Larkspur. There was more lounging while we watched the first episode of the second season of The Wire and then it was time to head on out for the evening's entertainment: dinner with Janiece, her SmartMan, and my siblings, Mummy Grabill and Max at Fleming's Steakhouse. Even though it was a great place, with good food and great (if dim) ambiance, I won't go on too long about the food, except to say that the steak was divine, as was the chocolate hazelnut mousse. No, I want to reserve my words for the wonderful company we had. Janiece and her SmartMan are always (to me, anyway) funny and entertaining folks. I was really happy for them to meet my siblings, who are very important to me. Mummy Grabill and Janiece got along like gang-busters (big surprise there) and Max and the guys got into an in depth discussion of PC gaming. I am happiest when surrounded by the people I care about having a good time with each other, so you can imagine how MUCH I was loving this. 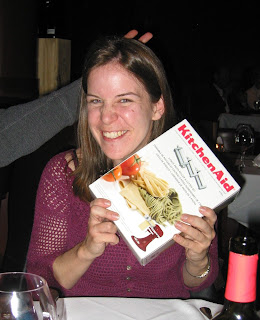 Then, to top it all off, I got prezzies! I got Willow on DVD and the Lord of the Rings trilogy books (both of these were per my request) and a Kitchen Aid pasta machine from Janiece, Jeri, Michelle, and Tania! Yay! This was something I had been wanting for months, but had to table due to lack of funds. I believe I started giggling maniacally when I saw what it was and, as you can see by the photo, I am planning much delicious mischief (the "bunny ears" fingers in the photo are my brother's). You are all invited to my house for fresh pasta!
Other gifts I have received for my birthday are: concert tickets, a limerick (see below), a toaster oven, and a crockpot. I've also gotten some really lovely and funny cards. All of these are greatly appreciated.

I love you all and really appreciate what you bring to my life.

And now, from the uber-clever mind of Tania:

A talented UCFer named Anne
Leads a life both witty and urban
With two cute little catties
Martin and Matti
And a taste for properly made Naan
Posted by Anne C. at 9:46 AM

Anne, are you coming to my house with Janiece? I want to learn how to make marshmallows. I want to make yummy things. Hopefully my thermostat will be fixed and re-installed (go Mechanicky Guy!) When you see my range you will most jealous! But in a good way! Happy Birthday!

I'm so glad you had the kind of birthday you deserve! The BEST! I had a great time meeting Janiece's SmartMan and, of course, D. I can see that there is lots of mischief Janiece and I will get up to in the future. :-) Love ya, sis!

I'm delighted to hear that you had a wonderful birthday!!! Now that your birthday is properly installed on my calendar, it will not be missed again! Even so, as we speak a card is trying to make its way across the country! *HUG*

How did we ever live before toaster ovens and crock pots?? I know I couldn't live with out mine!

Yes, Mech Gal, I am coming to visit you with Janiece. Making marshmallows is (in my opinion) surprisingly easy. I'll send you the recipe if you like.

Heh, Mummy Grabill, I remember what kind of mischief you got into the last time you commandeered one of my friends, so you can rest assured, I am checking around every corner and sweeping the area for booby traps. ;)

I too had a great time meeting all the smart people. It was a pleasure to meet Janiece and smart-man and D--- (oops almost said his real name...woulda seen that on Parez Hilton tomorrow morning!) I was more than impressed, i was very comfortable.