Cakes and Other Weekend Fun

This weekend was a fun and social weekend.
Friday night, I went to a friend's potluck birthday girls-night-out. I made a fabulous veggie lasagna. It's really simple (no eggplant unless you want it). The trick was a good faux ground meat (I used one that is made of mushroom protein.) and not using partial skim dairy products. I can see if someone is eating the whole thing, they'd want to limit their fat intake, but at a party where everyone has a small portion, it makes sense to make that small portion taste GOOD. My friend, Erica, was staying the night (as she lives in the mountains) and we stayed out much later than we expected.
Saturday night, I went out to a Greek restaurant with my good friend, Janiece and her SmartMan and Smart/HotFriends. They are such a fun group to get to know. I wore my new purple pumps and not only were they admired, they were comfortable and relatively easy to walk in. I think the best compliment on the evening was that we stayed out late, not wanting it to end. (Two late nights in a row? The only reason that worked is because I was able to sleep in the next day!) Janiece says the ouzo gave her weird dreams. I don't know if it does that for me, but it sure does taste nasty. I'll take a shot of tequila or vodka (ultra cold!) or practically anything else instead, please.
On Sunday, I went over to my brother and his fiancee's house to work on a couple projects. One of those projects was to bake and decorate a cake for the Superbowl. (Cake decorating is something I need to practice if my mum and I are going to avoid making a complete mess of my brother's wedding cake.) 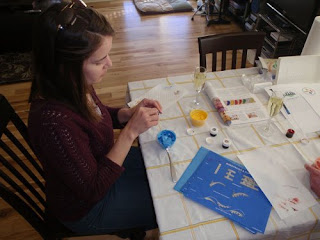 Here is a shot of me coloring the icing. Jenn is just outside of the shot, on the right. 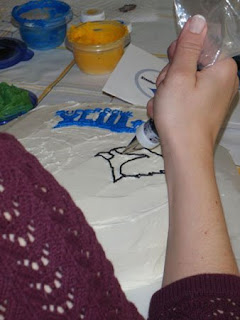 This one is me, delineating the Cardinals' logo... 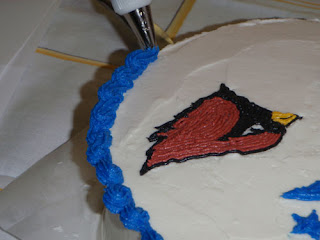 This one is Jenn, putting a border around the top... 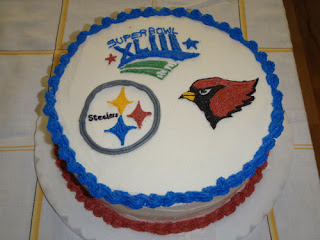 And THIS [cue fanfare] is the finished cake. Not bad, if I do say so myself. We were sick of buttercream frosting by the end, that's for sure.

Those pumps were HAWT.

And I'm glad you had fun.

Janiece, I would have to work hard to NOT have fun around you guys. :)

Great job on the cake! :) When I was little, my mom made wedding cakes! So if you need some tips/tricks I'd say come on out to MD and learn from an old pro! She's actually getting back into it now, and learning how to do fondant. :)

The really OLD wedding cakes (the cakes were't old. I mean olden times) were wrapped with almond paste called marzipan before the icing went on. The cakes were fruitcake, of course. And the top tier was carefully wrapped up and put away and taken out and eaten at the first child's christening.
Now, I believe, with the invention of deep freezes, the custom is to freeze the top layer and haul it out at the first wedding anniversary. I guess it's because weddings don't necessarily last till the first child, much less its christening. So one wouldn't want to waste the cake.

Mummy! [shakes head mournfully]
What a ray of sunshine you are.
(We need an icon for an eyeroll.)

Max and Jenn have requested NOT to do the "save the top tier" thing.

The more current tradition of wedding cakes being sold by Pastry Chefs is to give you a cake that feeds the # of people requested and then on the first anniversary of your wedding they will bake you a 'top tier' so that you have fresh cake instead of a frozen mess that will probably taste like chalk or looks like a disaster or most likely, both.

I have to say - I'd like to think it's more likely that often times the 1st baby is a long way off from the wedding (in our case, 6 years) and therefore not advisable to save for that long . . .

Also, Stacey, I do like that idea of a fresh cake - though, our baker gave my Mum very explicit instructions that she followed to a T and our cake tasted marvelous on our 1 year anniversary! But I *do* think that's only when you take the great pains that you are supposed to with all the layers of wrapping to protect it!