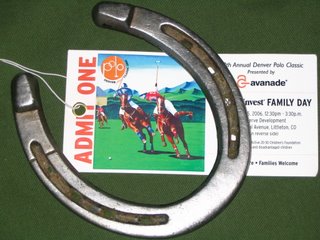 A friend of mine invited me to a fundraiser this weekend. I was about to refuse, as I had wanted to be a hermit this weekend. Then she said it was a polo tournament. I did a mental doubletake. How often is one invited to a polo tournament? So, of course, I said "yes."
It was a lot of fun. There was a giant tent to keep us out of the sun - it was very hot (100 deg. F) - and lots of food and drink. After we stuffed ourselves, I turned my attention to the polo matches. The final game of the day (not the final one of the tournament, I believe) was the best. The teams were much more professional (instead of the more amateurish ones in the games before). Their play was a lot tighter, more skilled, better teamwork and their horses were all proper horses. The amateur teams had horses that varied in size more, mainly because they are the horses available. I think there were even a few Argentines playing in the final match but I missed the entire statement by the announcer. They had a British announcer, which made it all the more official sounding.
Between the games, they have a tradition of allowing the spectators to come out on the field and replace the divots. I did that once and while out there, I found a horseshoe! My first impulse was to return it, but my friends said I should keep it. After a moment's thought, I agreed with them.
When I got home, I investigated the "proper" way of hanging the horseshoe. I found that it can be interpreted either way, so I decided to choose by testing each way. First I hung it with the ends down (as they do in Germany, Italy, Spain, etc.) then I hung it with the ends up (as they do in Great Britain). Turns out I prefer the latter. Perhaps that's the way I'm used to seeing it, but I also liked the bowl shape it makes. The shape seems to be very receptive and that's what I'd like to promote.
I had fun, but now I really want to go riding!
Posted by Anne C. at 11:23 PM