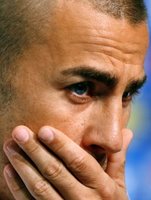 The Good News: Italy wins the World Cup! They played very well and deserved thier win.
The Bad News: The World Cup is over for four more years. [sniff] I'm going to have pick up watching European soccer in the interim.

The game was a real battle of giants. The Italians dominated the first half, but got tired. That meant the French dominated the second half. Thankfully, the Italians held on with thier awesome defense and eventually it went to penalty kicks. I say "thankfully" because I decided I was on the Italian side when the French got a goal off a penalty kick won off a dive. In fact, for all thier reputation for drama, the Italians were not the worst offenders for faking fouls. During this game, at least at the beginning, before the ref caught on and stopped believing thier tricks, the French were falling at the drop of a hat. The Italian goal was a real beauty, headed in off a beautiful cross from a corner kick. Then, in the second overtime period, nine minutes before the end of play and the beginning of the penalty kick "shootout", the French superstar, Zidane, lost his temper and headbutted an Italian player. It was caught on tape, but that wouldn't have mattered in soccer unless one of the officials saw it. Thankfully one did and reported it to the ref. Zidane was sent off the field with a red card. It was a stunning and horrible way to end his career.
On the plus side, I have a new love in my life -- the Italian captain, Fabio Cannavaro, pictured above. Not only is he a wonderful soccer player, he is a wonderful defensive player (my area of expertise). He's a great leader as well - cool-headed, enthusiastic, caring. He's a family man, with a pretty, but not super-model wife (you think I joke, but you should see the Italian goalie's super-model girlfriend!). He seems to be a great player AND a great person. (Plus, he's very good-looking, despite his decision to shave his head a la Sinead O'Connor.)
Posted by Anne C. at 11:02 PM