On Thursday I had fun going to a party, meeting new people, and dancing to some great 80s music (no, not a contradiction in terms). At least, I did until I put my foot wrong and hurt my knee a bit. Just enough to put an end to the dancing, not a permanent injury, thank goodness. We left at a good time. People were getting drunker and I wasn't, particularly as I needed to go to work the following day. Also, there was a guy whom I liked, but he was entirely too confident of his progress. It was better to leave and remove the temptation -- for myself that is. We'll see if anything else comes of it.

Today I've been cleaning the inside of my house. Tomorrow, my brother-in-law is coming over to help me clean the outside.

While I've been cleaning the house, I've been watching a dragon movies marathon on the SciFi Channel. Suprisingly, Dungeons & Dragons: Wrath of the Dragon God has been the best of the lot, with some truely egalitarian moves (there is no traditional romance, the main hero and heroine are already married, two of the adventurers are women, and not in namby-pamby roles). I liked it.

I have to admit I've been enjoying the Burger King ads featuring little people. Not only am I happy they've got employment, they're also darn funny. Certainly a lot better than the scary Burger King dude they had in thier last series of ads.

Lastly, you might take a look at the most recent addition to my list of cat pictures. Since I made a page devoted to Martin, I thought it only fitting that I do so for Matti as well.

I forgot to add that my friend, keckler's, post about corn has inspired me to eat as much corn as I can, even if I have to buy it in a grocery store. I recently found some lovely lovely white corn (my favorite) for 8 ears/dollar. See the proof of my enjoyment below. Delicious! 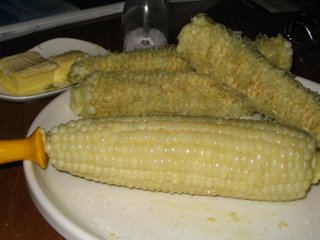 So, um, tell us about this boy then?

Well, at present, there is no more to say. It may come to nothing. It may not. I'll try to keep you informed on the subject. ;)