That's either me downing a lot of hard liquor.
or
Me trying to keep producing words even though I'm behind where I was last year, which was already behind where I "should" have been if I did the same amount every day. Actually, that makes me wonder about "shoulds." I don't operate under "should" in many areas of my life... ok, I'll admit to following convention while driving my car and in doing work at the office. But I don't follow convention in my personal life. So why should I be straining to reach an arbitrary average? It's not really a minimum -- that would be 0, since it's technically feasible to write 0 words per day for two weeks, then produce 4000 words per day and finish early. I guess that line for me is not an idea, but more of a goal to strive for - and that's only because it's above where I am. If I were (I wish) sailing along above it, I might use it as a mark of where not to drop below. It's arbitrary, and I know it's arbitrary, but it's something to measure my progress against.
I'm including a picture of the graph that I live by during November. The purple line is the "should" line that I've been talking about. The blue line is where I'd go if I keep a consistent pace with what I've done to date. (Hmm, the maker of this spreadsheet seems obsessed with consistent pace.) The light pink line is last year's data and the dark pink is this year's. I guess that, knowing my own habits, I'm a little more keyed into patterns of work repeating. 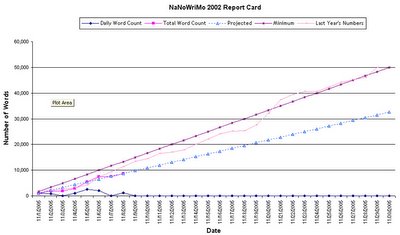 Oh, and the dark blue line at the bottom is daily word counts. You might see a dip in the graph there that shows that Monday I wrote nothing towards the novel. Mainly that's because I got paid that day and so was able to go out and go grocery shopping, get medications and chicken for the cats, etc. Then, when I came home, I made the chicken into cat food and put it in the freezer. So, a bunch of household errands got done and no writing. Last night I got a late start on writing, for some reason, but managed to stay up late enough to produce some decent amount of words. I didn't make the "minimum" (1667 words), but I did slightly better than my pace up to that date. If I at least maintain a reasonable pace during the weekdays, I can use the weekends to make up the deficit.
The good news is that the story was flowing better last night, and I actually wrote faster than I usually do. I've also got a game I'm playing with this novel. I shuffled a tarot deck and have it sitting on my desk. When I think, "ok, what happens next?" if I don't know, I flip over the top card and then try to incorporate something in it -- usually a character or an event -- into the story. It's giving the story a nice organic feel. Characters appear and give the sense that they'll be back, or a series of events will go a little differently than you'd expect. Obviously, if it doesn't really make sense, I'll either ignore it, or write it and edit it out later. But that hasn't happened yet.
One thing I am sure of -- I really like the family that is the center of this story.
Posted by Anne C. at 12:42 PM

I love the Tarot card thing. I can imagine trying to fit the card into whatever scene you are writing at the time. What fun (when you are looking in from the outside!)! :-)