I have, in the past, posted about a new discovery, Facebook games. I've had to cut back because it's a big timesuck. I gave up Farmtown, Cafe World, and Country Story (which was the hardest to give up as I "abandoned" some of my neighbors) among others. I have not given up Restaurant City yet.

I had a lovely garden cafe with a lovely entry and my sister, another RC restaurateur, has an English pub. She was considering quitting, as she had pretty much leveled up all the dishes that were appropriate to her venue and the place was well set up in its "narrative." When she said that, I thought "yeah, she's right. Maybe it's time to quit."

And then they brought out the Japanese themed decor and dishes. I was reeled back in.

I've set up a new restaurant, and started all the work of earning money to decorate it and level up the Japanese dishes. The tables are arranged around the grills, hibachi style, and I have a zen garden in the back. My sister offered her financial backing (buying me three of those nice black stoves) and is now an unofficial co-owner. I imagine it as if I were the manager and she the financier who comes in, hangs out at the sushi bar (all the servers know what she likes and brings it to her right away and on the house) and chills out in the zen garden.

MWT put together this image of the restaurant to show another player, so I stole it to show all of you. It's progressed a little since this image was taken, but not enough to put together a new image. (Thanks, MWT, by the way! :)

Speaking of MWT:
This is one cute tableau at MWT's restaurant. It looks like three cactus cowboys trying to corral a couple cats. Good luck, boys! ;) 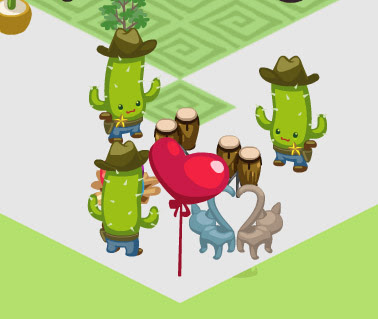 What? You stole my secret spy photo of your restaurant?? Thief, thief!

Actually the cactus guys were supposed to be playing the drums while the cats watched. But the other way works too. ;)

And I'm glad you didn't quit. My pool of people I can trade unlocked ingredients with is steadily dwindling...

Ha ha! Can't believe it took me so long to see this post! I'm enjoying being the co-owner; I just give you money and buy you what you tell me to buy and you do all the creative work. Works rather well for me. :-)