It's been a good weekend. I haven't got everything done that I wanted to (ahem*Taxes!*ahem) but it was pretty full regardless. 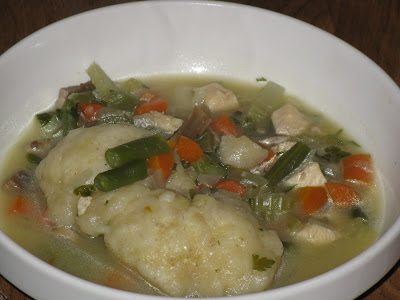 Friday, after making it through a pretty busy week, preparing for a big presentation, I went home and made chicken and dumplings. I overcooked the vegetables just a tad, but I think I can avoid that the next time around. They were very tasty. I also found and bought DVDs of Monty Python's Holy Grail and Life of Brian that were only $6. This switchover to Blu-Ray has been great for my DVD library! I like listening to the commentaries while I'm doing other stuff.

Saturday, I was blessed with warm, sunny weather, so I took the bike out for a spin. Originally, I was just going to zip over the grocery store, but after I had to start it on the hill (thank goodness I live half a block from a steep hill!), I decided to go up and visit my sister and her family and charge the battery. Alex was in fine form, wanting to be read to and examining my glasses and the zippers on my jacket.
I did a bunch of painting downstairs. The claim that I was done painting was premature. When I went back to look at the paint job, it was uneven. >:( Grrr... I also worked on the vinyl tile. It's pretty close to being done. All of this seems to take a long time! I'm so looking forward to having it done.

Today, I painted some more, repotted some plants, put the ingredients for the Hungarian Goulash (prompted by an invite by Hot Chick Janiece that I unfortunately had to refuse) in the Crock Pot 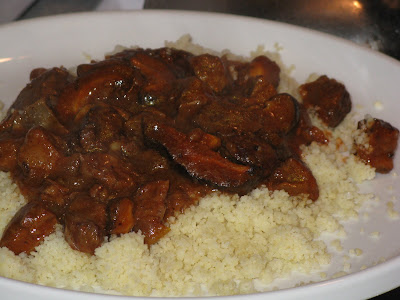 then headed out to the office to get a head start on some of the work I have coming up next week.

The other cool thing I made this weekend were these: 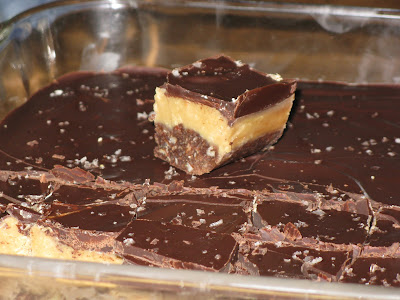 It's the most addictive cookie I've had in a long time. It ranks right up there with seven-layer cookies. It's an amazing combination of chopped nuts, peanut butter, dark chocolate, and pink flake salt. I found the recipe at the Tasty Kitchen Blog. When I've eaten one, all I can do is sit and think about how I can rationalize having another. So, make these at your own risk!
Posted by Anne C. at 10:40 PM

I haven't been "dieting," but I've been tracking my food intake and trying to cut out some things that Mom's having to cut out just in case I end up having similar nutritional guidelines in the future... but THIS POST made me want to open up the fridge and EAT! LOL So, thank you, for making my mouth water Anne!

Was the Hungarian Goulash good? Yay for you for getting out on the bike!!! Mine is still sitting in my ex boyfriends' garage, hooked up to a battery tender. The weather is finally warming up, but we're in a state of constant rain here. :/

Jen, see my response to your undiagnosable post about watching what we eat.

The Hungarian Goulash is delicious. I made it for the first time when Janiece and friends and family came over for dinner and it's been one of her regular dinners ever since. The browning of the meat is a bit time consuming, but it's delicious. I photographed it here over couscous because I had gotten home late from work and was starving and couscous is the starch that takes the least amount of time to cook. Normally I'd have it over spaetzel.

subtle Aileen, subtle.
Feel free to fly down to Houston where I've been cooking my fingers to the bone, only to have Patti exclaim - I have to get back to eating frozen dinnres again. All this cooking is killing me - um, what cooking EXACTLY was she doing? She did explain that what she meant was the money for REAL food was blowing the food budget. Not to mention the fact we're feeding Her, her mom, her 29 y/o son, her newly born grandson's parents and myself. If we maybe told other people to BUY THEIR OWN DAMN FOOD, that might solve the problem. I'm just saying.
PS - she is VERY greatful i'm here helping and cooking, I just found the above humorous.
Miss you guys......

We miss you too, Stacey! Maybe Patti should resort to spaghetti with ketchup or half burnt burgers with partially frozen buns to "encourage" her guests to suggest a dinner out for everyone.

Aileen, with great cooks for parents and a fabulous cook like Auntie Jenn living only a block away, it's amazing Alex is such a slim fellow. :)

Dammit - I've aready eaten my lunch today and was feeling fine about it until I see this post and now I'm suddenly starving! *shakes fist*