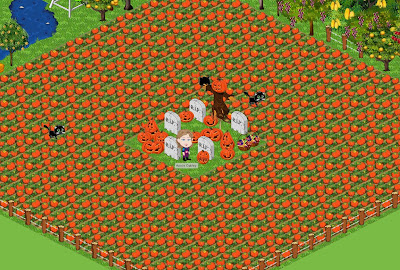 I had stopped playing Farmtown some time ago, when it became like a second job that I would need to take care of when I got home from my paying job. I even tried a routine that would only require me to visit the farm twice a week, but the fact that there was the word "require" in there makes it pretty clear why I dropped it. The main draw of Farmtown was the community, and I didn't have time for any of that.

Well, the fine developers behind Farmtown managed to lure me back for a little more play by including Hallowe'en decorations for the farm. It's pretty well done (thought about the tree of skeletons that you can see at Nathan's, but it seemed a bit gruesome for my taste), as you can see above.

Thanks, Farmtown, for bringing me back, even if it's just for a little while.
Posted by Anne C. at 8:00 AM

Just when I thought I was out, THEY PULL ME BACK IN!

I've been meaning to make a permanent cemetery, now that I have a collection of headstones. Still haven't gotten around to it yet though. Too much Cafe World I think. >.>