I love those moments when I put together some wonderful flavors.
Four months ago, I blogged about making homemade butter. At least one of those ramekins (the lemon basil butter) I put in the freezer. Because the "seal" was ice and the ice was starting sublimate, last week, I took it out to use. It was sitting in the fridge for a couple of days until one day, after getting home late from work, I thought, "I really need to use that. What will I eat it with?"

I decided on bread and took a ciabatta out of the freezer and put it in the toaster oven to defrost and warm. I then sliced it up and toasted it. As I was putting the lemon basil butter on to soften and melt, I thought, "What else should I have with this?"

Some tomatoes sitting on the counter (I rarely refrigerate tomatoes) caught my eye. I sliced them, put them on the lemon basil buttered toast, sprinkled on some kosher salt and took a bite. MMmmmmm! Heavenly! 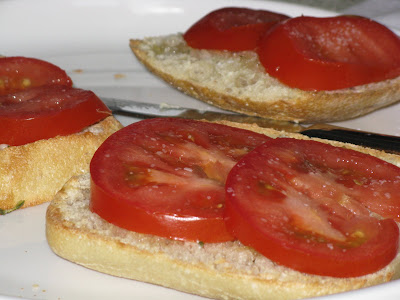 This photo was actually taken this weekend, when I made it again for Susan. This time around, I managed to not wolf it down and savored what exactly about the flavors worked so well. I think it was the fact that it had so many of the basic flavors. The tomatoes were sweet, the salt was salty, the bread was nutty, and the lemon butter was both fatty and tart. It was perfect harmony.
Posted by Anne C. at 7:30 AM