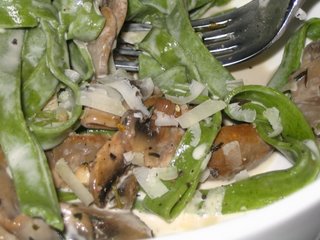 Because I am enjoying a particularly good run of dinners and I'm remembering to photograph them, here's another yummy dinner I made last night.
It's a mushroom wine cream sauce on spinach linguini. The sauce was very easy. I started with chopped garlic and shallots (green onions) sauteed in butter until they were soft. Then I added a lot of sliced mushrooms (white and cremini), which I allowed to cook until they were close to done. I sprinkled on kosher salt and herbs de Provance (thyme, lavender, etc.) Then I added about a 1/3 of a bottle of white wine (dry Reisling, in this case), which I allowed to simmer until it had reduced by a third. Then I poured in about 8 oz (small box, right?) of heavy cream. I allowed that to simmer until it had reduced by at least half. Finally, I tasted it, adjusted the salt, pepper, and herbs and served it on spinach linguini with grated parmesan.
I had expected the sauce to thicken more, but overall it was attractive and very yummy. I think it could be adjusted to be a chicken and mushroom sauce, if necessary. I'd also add some more earthy mushrooms, like shitake. I'll have to think about changing the cream from a purely reduction sauce to a starch thickened sauce if I want it to be thicker. Honestly though, I don't think people would complain about this dish. The sauce broke down when I reheated the dish for lunch today, but the flavor was all there, so I didn't mind at all.
Posted by Anne C. at 12:51 PM

Well, for Heaven's sake Anne! Good thing I customarily open your blog after a good meal.
I gather that you had plenty over. A third of a bottle of white whine and a whole box of heavy cream has GOT to have made a lot of sauce. No, heated cream on its own with wine tends to thin rather than thicken. All that will thicken it is cornstarch or flour.

The "whine" is a Freudian slip.

Anne, I vote for not putting corn starch or flour in the white sauce that would make it mundane. JDC

Not really "a lot". It was probably 2 cups of liquid that got boiled down by half. There were a heck of a lot of mushrooms though.

Thanks for your vote, Daddy. :)