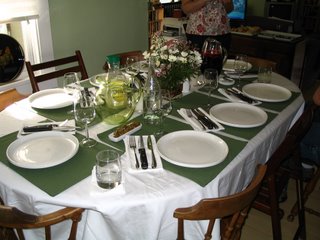 I'm not sure how it happened, but I seem to have dropped the blogging for a couple weeks. Big apology to my readers, all two of them.
In the interim, I've had my annual Spring Dinner (pictured), made breakfast for the office, and gone camping at Rocky Mountain National Park.
Ok, well, I guess that explains the haitus.
The Spring Dinner was a success. Seven guests and I enjoyed a full meal of Argentine food, including sangria, empanadas, milanesas, chorizos and bread, grilled steak, green salad, ensalada rusa (potato salad), flan and gelato. The grill was acting up a bit, but we ended on a good note with the yummy desserts. I was much better prepared than last year (in fact, my sister and brother-in-law came over to help but ended up not having much to do), but the grill problem was frustrating.
My office has "donut day" every friday. An employee is assigned a week to bring breakfast for the entire office. Often that turns out to be donuts or bagels, but every once in a while, a culinarily-gifted employee will bring in a full breakfast. I happen to be one of those (big suprise, eh?). I made four different kinds of fritattas and mini chocolate croissants and served them with bagels and orange juice. This may seem like an unfair trade for what sometimes is a breakfast of a couple dozen Safeway donuts, but I get great enjoyment out of cooking for people and I only have to do it about every six months or so. I like being known in the office as a good cook.
And finally, last weekend I went camping with some good friends of mine. We camped for two days at Rocky Mountain National Park. The weather was lovely. It was hot in Denver, but at the higher elevation, the heat was blunted to a very pleasant level. It was a bit cool at night, but nothing a cozy sleeping bag, a thermarest, and a wool blanket couldn't handle. This year's annual camping purchase was a little gas stove and some camping pots. My first year not mooching hot water for breakfast! Yay! I had some of my favorite camping foods: bacon and hot chocolate for breakfast; summer sausage and cheese for lunch; steak, potatoes, and tomatoes for dinner; s'mores for dessert. (Krissy mastered the art of the s'more during our two evenings by the campfire.) We went for a short hike, but mostly lounged about and relaxed. 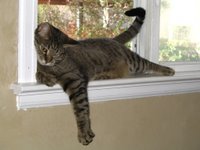 It was nice to get away, but it was also nice to come back to my handsome boys (Martin pictured).
During the camping trip, Kevin asked about blogs and I revealed that I have this one. Wendy then described it as "pretty normal." At first, I was a bit taken aback. "Normal?" That's like saying "boring," isn't it? But, then I turned my ego down a notch or two and had to admit to myself that yes, this blog is pretty normal and no, that doesn't mean it's boring. At least, not boring to people who know me. I hope. ;)
Posted by Anne C. at 8:12 PM

Awww, Richard. Nice to hear from you!

And then there were, well, another one anyway...

And Steve too!
You guys sure know how to make my day. :)

hey - did you borrow my name and my cat?! thanks for the link to my post on gender and reading too :-)

Well, a lull in posting makes it much easier for slackers like me to catch up after our own lulls!

Our office has a weekly treat rotation and I, too, like to actually make something and not just buy a box of cookies. I just like cooking for people!