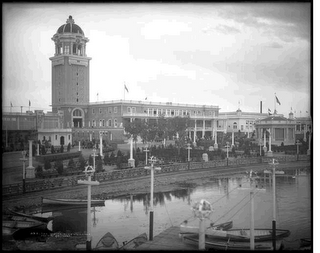 My friend, Rachel, discovered I had never been to the Lakeside Amusement Park here in Denver. She promptly organized a field trip, which was yesterday evening. It was a heck of a lot of fun. The park, originally called White City (presumably in honor of the Chicago World's Fair (1893), also called the White City), has been operating since 1908 and has old rides that give you as much fear about them breaking down as they do designed-in-fear. My guide was Rachel's son, Benton, who is 9 or 10. His mom and little sister, Ava (5), had to go on the kiddie rides, so he and I went on the big rides. 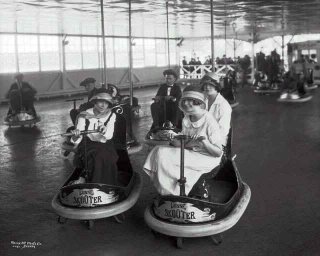 We did the "Wild Chipmunk" (opened 1955) three times, the "Cyclone" (opened 1940) once, the "Scrambler", racecars, "Skooter Boats", "Matterhorn" (which I know I've ridden at Boonesboro Days), bumper cars (not the ones pictured, thank goodness), and some devilish thing that swings upside down. Fortunately that one was last. I thought the going upside down was fun but my stomach did not.
Some other people from the office came: my old officemate, Dee, and his two kids, Benjamin and Jonathan; also Scott and his fabulous girlfriend, Colleen. Because Benton wasn't amenable to sitting still, I didn't get to talk to them as much as I would have liked, but we have plans to go to Elitches Amusement Park together later this summer. I had lots of fun and hope to go again. Best thing of all, it's inexpensive and not crowded. If any of you are interested, just give me a call! 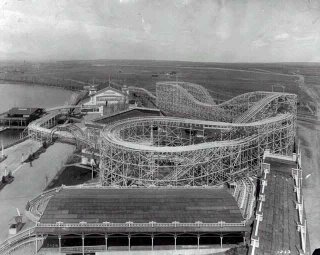 I couldn't resist including this photo. Note the fields beyond the roller coaster. My house is now located in the fields to the right (though off the picture's view). Cool, huh?
Posted by Anne C. at 8:00 AM