A Rare Glimpse of Me 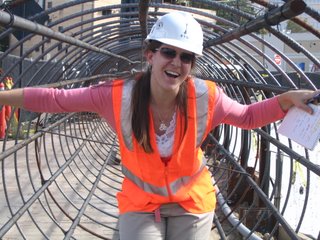 I know that select members of my audience (who shall remain nameless) think that construction photos and stories are boring. Hopefully this one will be acceptable. I rarely put photos of myself on this site, but for this one, I'll make an exception.
For those who have never seen a picture of me -- Hi! [waves] This is me. I'm not usually attired in such attractive safety wear, but on a jobsite, it's required.
Christina, the general contractor's assistant project manager, took this picture of me while we were doing our weekly site visit. She's a neat gal, probably my age, but with 4 kids - quadruplets - two pairs of identical twins. We joke that it's perfect preparation for her job managing construction guys.
The project is coming along pretty well. A few minor impending disasters, but we've managed to deflect all of them so far.
My mum wrote me a quick note that said, among other things, "I can tell from your blog that you're busy." I'm guessing that's because I'm too busy to post things as often as I'd like. I have been extrodinarily busy lately. I spent several evenings painting pottery for gifts (one is on its way to the recipients, the other has already been given but I need to get a photo of it) and last weekend I very industriously did household chores. Granted, they were outdoor chores on a gloriously beautiful weekend, but now I know why people pay other people to wash thier windows. I'm technically not done, since I need to finish washing the insides of the windows, but I'm thinking that won't happen until next weekend, when (depending on the weather) I may be able to continue/finish painting the fence and deck and maybe start on repainting the trim around the windows. Now that really is boring to read about.
I'm feeling like I'm accomplishing quite a bit, which is good. Next thing on the agenda, have more entertaining adventures to blog about -OR- start writing again so I can tell you all what the characters are up to.
And finally, I thought I'd include another construction photo, because I think it's beautiful: 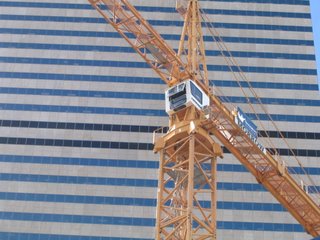 Saftey orange becomes you! I haven't been around enough to see any of your characters but I do like the construction photos... Takes all kinds I guess.

I particularly like the lace behind the manly orange vest and hardhat.

I agree with Kevin ... safety orange is a nice color, and it's a nice pic, too ... shows off your fun side.

Here here to your fun side Anne ... I think the second photo is beautiful too.

I LOVE the picture of you. And wow you sound busy!! You make me sound incredibly undproductive.

Laura, you have a child. That is an entirely different category of "productivity."

Aileen - I'm shocked :)
Anne, I'm so glad you posted this picture. It really captures a lot of your essence here. Fun, strong, self-assured, just to name a few. I'm glad to see the project is going well and most looming crisis have been averted. Looking forward to seeing more.