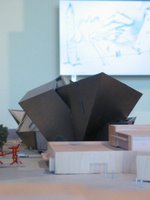 I went to the new wing of the Denver Art Museum during thier opening weekend and all I have to say is "Wow!"

Ok, I have more to say than that.

I grew up near Washington DC and am used to going to the Smithsonian quite often. The Air & Space Museum used to be my favorite, but then it got too crowded. I really like the Natural History Museum, but even that loses something after a while, since how many times can you look at stuffed animals? So, eventually I went into the East Wing of the National Art Gallery. That's the one that was designed by I. M. Pei. I'm not the biggest fan of purely modern architecture, but I was eventually seduced by the cool traveling exhibits. The space is pretty cool too, though I don't have a strong mental picture of it, like I do of my favorite museum architecturally, the Freer/Sackler Gallery (more on that some other time). Actually, I do love the pairing of the Beaux Arts west wing and the Modern east wing of the National Art Gallery.

The Denver Art Museum (Hamilton Building) is a bit monolithic and imposing on the outside. I think it was meant to be striking and attention getting... which it is. But it almost entirely ignores it's context. It looks like an alien spaceship that crash landed in the middle of Denver. There are a few lovely juxtapositions, but for the most part it is too self-concious for my taste.

After you walk inside, however, the true beauty of the building unfolds before you. It almost literally unfolds. It's a dynamic space/experience that is always changing and surprising you. Many variables are brought into play: the light, the movement of people, your own path through the space, and where you happen to be looking at the time. Turn around periodically or look up, you may be surprised. There are a few odd touches, like the wierd digital numbers, but I think they are part of the "modern art" interpretation. They also flubbed a little on the wooden "curbs" they put to alert people to the areas of low head room.

The final attractive point on the new DAM is the art. There is a fantastic Western American Art exhibit that I want to wander amongst when there are *a lot* fewer people. There are also cool interactive pieces for both adults and children sprinkled about the museum, which I also want to play with.

I think it's a place worth taking out of town guests, and I might even spring for a membership!

Edited to add: I forgot to mention my other activities of the weekend - standing in line to get the tickets, beginning to strip paint from my window trim, going to a great new restaurant (Buenos Aires Grill), walking the Race for the Cure with JR & Stacey, and working on the paperwork for the A.R.E.
Posted by Anne C. at 9:00 PM

I want to go. Specially as there is western art! Let's go when I visit.

I'm guessing that's you, Darren. Yes, I was thinking exactly the same thing.

Ah, usually I can guess which comments are you, but that one was just too innocuous.

I think you would LOVE the Western Art Exhibit. We will definitely go when you visit next.