Cruiser vs. Sportbike (Not Really)

While Jen A. was here, I pointed out the cherry red Suzuki I saw downtown (the actual one that prompted the post, not a photo). She looked it over and asked "so what do you like about it?" Since she is the owner of a purple Kawasaki Ninja, I interpreted the question accordingly to be "it doesn't appeal to me, but I'm interested in understanding why it appeals to you." I gave her some kind of scattered answer, but have been thinking about it ever since.
Here's what I've come up with:
I don't really like cruisers as a type. I effing hate some of the stretched out deformed looking "choppers." I think they take something that is beautiful and based on function and screw it up for the sake of image.
I also don't really like sportsbikes as a type. They look uncomfortable to me (edited to add: I saw another picture of Jen's bike (with a different Jenn riding) and admit that it doesn't actually look uncomfortable - some more extreme sportbikes do, and that's the mental image I have of them) and I don't like the strange bulge of the tank. They are functional, and specifically designed for speed, so they have that in their favor.
What I like is that a motorbike connects me back to people like this: 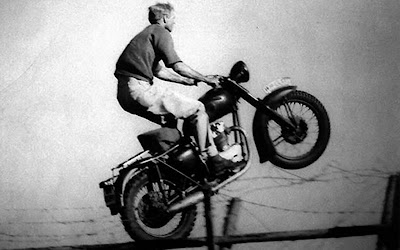 That, dear readers, is the incomparable Steve McQueen in a scene from The Great Escape. (Actually, to be completely honest, it might be his buddy, Bud Ekins, since he also stunt riding for the jump.) McQueen is a poster boy for motorcycling in the 60s and early 70s. He even competed (as a semi-professional, even though his movie contracts forbid it). He and that time period exemplify for me the coolness of motorcycling. Bikes back then were lean and functional. They were a symbol of freedom and non-conformity, not a two wheeled couch that you park in front of the bar and afford with a second mortgage.
So, with that in mind, it's not surprising that one of the first dealerships I visited when looking at what my next bike will be, I went to a Triumph dealership. 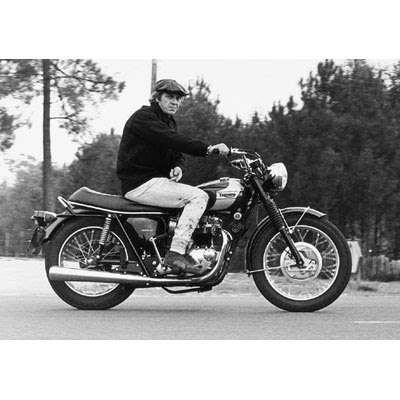 This is McQueen on a Triumph (back in the 70s, by his haircut), and the brand prides itself of the pedigree of it's lines. They even have a line of bikes, called "modern classics," all with retro design. That really appeals to me. The Suzuki cruiser I like is not just any of their cruisers. It's the leanest and nearly the smallest of their cruiser line. It's retro styling with a comfy riding position (haven't checked on footpeg position -- wouldn't want it to be forward of my knee). It could almost pass as an older bike. Most cruisers don't fill that qualification for me.

So, that's what I like about that bike, Jen. It's a link back to the old days of motorcycling.
Posted by Anne C. at 12:55 PM

LOL You're right & wrong Anne... As we approached the Suzuki I asked you what you liked about it because I honestly wanted your unfiltered opinion of why it appeals to you, but I was curious outside of my own vision. I honestly was trying to process my own thoughts on the bike even as I asked you -- I'm growing more fond of cruisers that are pared down and more "original" (like those you are attracted to), though I still don't care for the larger Harleys or choppers.

I actually found myself liking your little Suzuki as we admired it's pretty red paint and you tried to form words around your attraction.

My bike is only a 500cc sportbike, and thus has a much more upright riding position than most 600cc+ sportbikes. And after having ridden it for four years, I can say I'm interested in trying out something that's even a little more upright, putting my legs more under me (though w/out the toe extending in front of the knee) than behind me.

I'm glad you were able to tie your attraction to the history of motorcycling, my dear friend. I think my Dad would truly love to talk to you. I was never really drawn to his old motorbikes, but then again what probably draws me to the bikes I do like is the ones that bridge the gap between four-legged horsepower and two-wheeled horsepower.

I'm most comfortable on a bike that reminds me of horseback riding, and the seat on my Ninja does remind me of the gentle sloping of an equine back. :-D

Oooh, that (tie to horseback riding) is a nice rationale. I'll have to think about that the next time I'm on a sportbike.

The only Harley I've ever thought attractive was a Sportster, but I've heard they are a rough ride. Plus, I'm not particularly interested in buying something that's overpriced and *everyone else* is also doing (note my lack of Mac tech). I'll leave the Harleys to those who appreciate them more.