A few years back when I was dating a fellow who was into everything Asian, I had a few revelations regarding Asian cuisine. One of those was Vietnamese spring rolls. I found from various online resources like this one that they were even easier to make than sushi.

On her last visit (after we were done tiling), my mum and I had spring rolls at a local restaurant. They were fine. Not great, but not bad either. She commented on what a nice healthy snack they would make and I pointed out how simple they are to make with the right ingredients. I gave her my stash of rice paper disks and promised to send the recipe (which are more like assembly instructions really). Then, either forgetting or being too busy, I didn't.

SO! Now it's time to show mum how to make them.

Here are the ingredients:
- rice paper wrappers (thin "paper" disks made of rice and tapioca, some are thicker than others. I like the thin ones, since the thick ones can be a bit too rubbery.)
- rice noodles (I use the "vermicelli" style, since the small texture is more to my taste. These must be "cooked" by softening in boiling hot water for a few minutes. Monitor for doneness, then stop cooking by drenching in cold water.)
- lettuce, chiffonade(ed?) (I use red or green leaf, but you could experiment with other leafy greens)
- carrots, shredded or julienned
- cucumber, julienned (use an English cucumber if you don't want the work of cutting out the central seed portion of the typical cucumber)
- bean sprouts
- minced herbs, Thai basil, mint, and coriander are best, but regular basil would be ok too.
and
though it's typically done with steamed shrimp, I've done it with sauteed tofu here. (Fresh, baked tofu bought at a local Asian market sauteed in toasted sesame oil.)

Ultimately, you can put in whatever you like. Feel free to experiment (though I can tell you right now, celery is a little too difficult to bite through to be easily incorporated). The Steamy Kitchen cookbook I got recently has a pork filling similar to this one. Ultimately, I'll probably try that. But the one I'm showing here is the one I know best.

One must is to have a dipping sauce or two. How good of a sauce determines some of your success. This recipe has two fairly basic ones, a dip based on fish sauce and one based on hoisin sauce and peanuts (though another one somewhere said to mix chunky peanut butter and hoisin sauce, with warm water to thin it). I, unfortunately, went with packaged sauces and wasn't super happy with the results.

Well, on to the procedure: 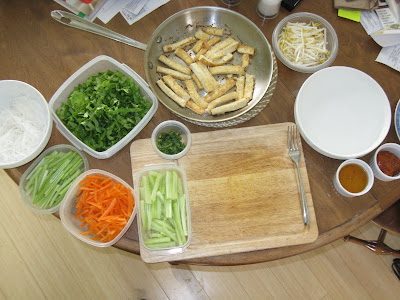 Collect all your ingredients. As with stir-fry, there is no time to do prep after you've started. 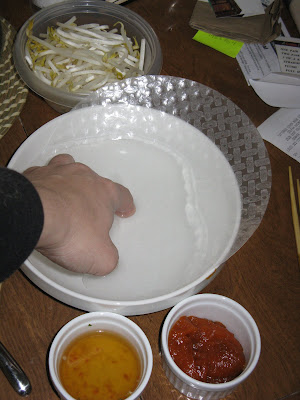 Once you have everything ready to go, put a disk of rice paper wrapper into a bowl of hot water. It will begin to soften gradually. Take it out when it's softened but you can still feel a little bit of the structure of the wrap. It will continue to soften after you take it out. Leaving it in longer risks easy tearing. 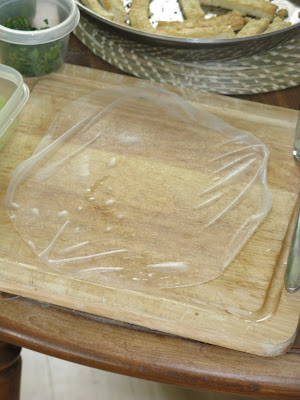 Lay out the softened disk carefully. 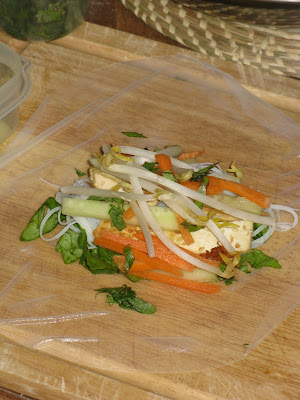 Layer on the fillings you want. Here, I've done lettuce, then a bit of the rice noodle, then the sauteed tofu, then carrots, cucumber, bean sprouts, and herbs. Later, I put the tofu down first so that it showed better through the thin wrapper when I rolled it up. Try not to do too much (this one probably is close to being too much) and keep it contained to the lower half of the wrapper. 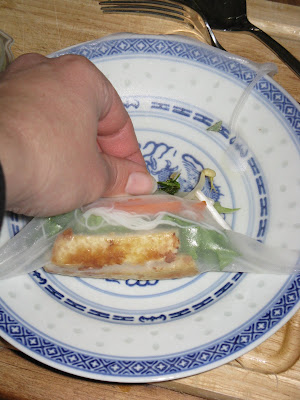 Pull up the lower half of the wrapper, rolling the filling into a log. Try and keep it nice and tight. (Hint: doing this one handed while taking a picture with the other is NOT a good way to do this.) 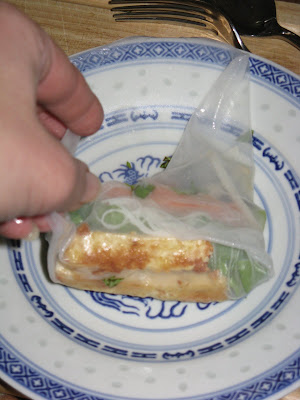 Fold in the two sides. Luckily, the wrapper will stick to itself, making this easier. Then, continue rolling into a log. 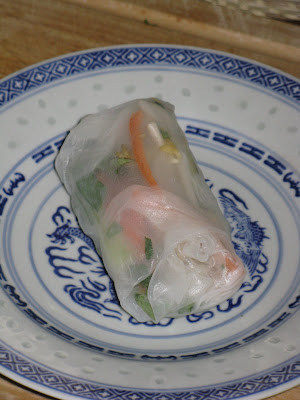 Presto. Finished product. Eat these fairly soon after making, as rice noodles and rice paper don't keep well in the fridge. Experiment with fillings, find your favorites. Have fun with it. 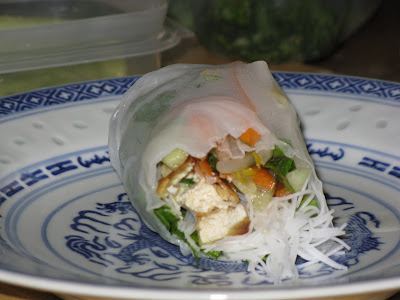 these look most excellent!

I am SO glad I read this after I ate lunch and not before. Gorgeous!

I recently modified a shredded pork slow cooker recipe someone sent me (akg? Peachy Keen?) and I think that would make a great filling. Hmm...

Thanks for reminding me how much I LOVE these things and how much I want to make them again soon. You turned me on to these in the first place!