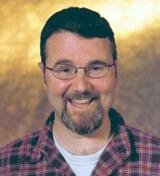 While watching the Oscar "In Memoriam" clip reel, I was shocked to see Joe Ranft's name listed. It makes me unreasonably sad to see his career cut short. I haven't been this affected by a celebrity death since Phil Hartman was shot.
Who was this guy? He worked as a story supervisor and animator for Pixar (my *favorite* movie makers). His voice credits include: Heimlich in A Bug's Life; Wheezy in Toy Story 2; and Jacques in Finding Nemo. I thought he was Roz in Monsters, Inc. as well, but now I see it was Bob Peterson, another Pixar story guy. See, they often end up loving how a particular Pixar employee does the voice for the character, so instead of hiring an actor or a voice talent to do the role, they just keep the original voice.
So what happened? August 16th of last year, he was in a car that went off a cliff. Yeah, that's not a typo. Apparently that happens in California sometimes. The driver swerved or lost control of the car in some way and they went off a cliff. Amazingly a third person in the car survived.
So sad. :(
Ok, I'll put away my Pixar-geekery now. RIP.
Posted by Anne C. at 10:05 PM

That is very sad . . . what a loss to Pixar and to us all! Thanks for digging up the story Anne, it's a great tribute to him.